The Ocean March: Youth Against Plastics

The Ocean March: Youth Against Plastics 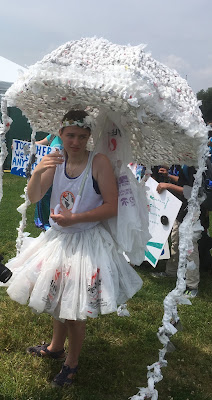 I was one of the oldest people I saw at the first ever March for the Ocean last week in Washington DC.

It was fantastic to be surrounded by so many enthusiastic young folks from all over the US, with matching t-shirts like “Heirs to Our Ocean:H200,” “Plastic Pollution Coalition,” and “Sea Youth.”  I met youth from Maine, North Carolina, Texas and California.

Youth are especially passionate about solving the problem of plastic pollution and marine debris.  Their clever signs condemned plastic straws, single use plastic, and the giant Pacific Garbage Patch and touted hopeful messages like “Together We Can Do Anything!” “Walrus Lives Matter,” and “Make the Ocean Great Again.”

Check out this dress made out of plastic bags – seas turtles often mistake plastic bags for their favorite jelly fish food and die after dinner.  All marine life was happy that the March for the Ocean was the first March since Jan 2017 (this was my 4th March!) to be intentionally plastic free in products and vendors.

Youth did more in DC last week than March on Saturday.  On Thursday, as part of the annual Capitol Hill Oceans Week, I went with some of them to lobby our legislators on ocean issues like offshore oil drilling and plastic pollution. 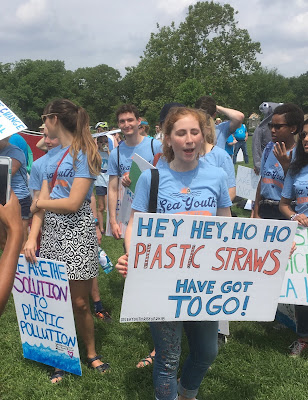 From legislators of both parties, like Senator Sheldon Whitehouse (D-RI) and Dan Sullivan (R-AK) we learned that both the House and Senate have bipartisan Ocean Caucuses.  They say the ocean is not the concern of only one party, and that Senate last year unanimously passed a bipartisan Marine Debris Bill, HR2748, the “Save Our Seas Act.”

We put 8 million metric tons of plastic into the ocean every year and plastic never biodegrades.  This bill funds NOAA marine debris efforts and instructs the State Department to work with other nations to reduce plastic pollution.

The Bill awaits action by the House, where it has only 44 cosponsors, of both parties, but needs more support to come to the floor for action.  Check out https://www.congress.gov/bill/115th-congress/house-bill/2748/cosponsors to see if your rep has signed on.  The World Wildlife Fund (who were also in full force at the March) has a good sample letter to send if your rep has not.  https://support.worldwildlife.org/site/Advocacy?cmd=display&page=UserAction&id=953 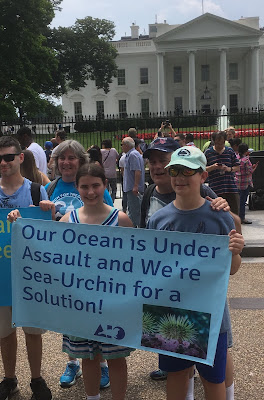 I was inspired and hopeful after walking with these youth and hearing their strong and passionate voices.  As one young woman said, “We have to preach the ocean gospel!”  I’m listening.  And acting.
__________________

Our Blue Theology Ministry in Pacific Grove, CA informs and encourages youth and adult groups to care about God’s ocean and preach its gospel.  BlueTheology.com  I write these ocean devotionals every Wednesday here and at www.bluetheologytideings.blogspot.com.

Posted by Deborah Streeter at 6:30 AM