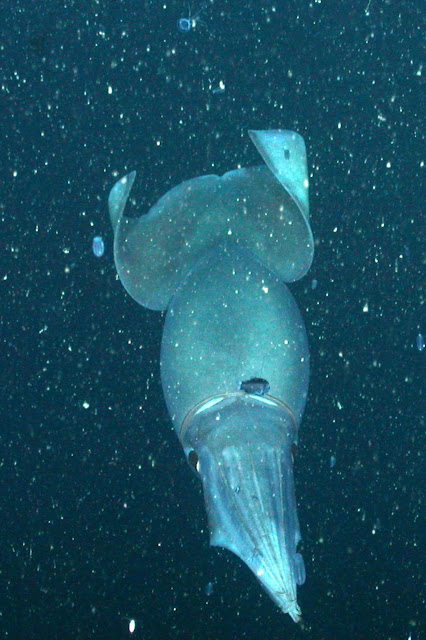 What’s it like to live down deep?  Ask this Humboldt squid, swimming almost half a mile down in the Point Sur Canyon.  Its home is pitch black, deeply cold, high pressured.  No sunshine, so no plants.  But lots of this yummy “marine snow,” the delicate term for the organic “detritus” shed by animals and plants above.  Quite nutritious snow, although squid dine on larger morsels.

The deep sea may seem desolate and bleak, but more organisms call the benthic ocean home (17,000 different species) than any other place on earth.  (It is after all, 60% of all habitable space.)

This photo records a moment when both scientist and squid surprised each other.  Neither were expecting it when the scientist spotted this rarely seen squid on the video of the remotely operated vehicle he was piloting (remotely) through a deep sea canyon.  The squid was probably just as bewildered to see the ROV, a whirring floodlit machine not much bigger than itself.

Lane goes on these strenuous hikes to be “be-wild-er-ed.”  This, he says, means being literally “lured into the wild.”  In starkness he encounters God, echoing one of his hiking saint
s, medieval mystic Mechthild of Magdeburg, who calls God her “true wilderness.”

Although I am a walker, I prefer the known to the unknown.  I like to plan and explain.  I can even presume to explain and understand God.  I don’t like being bewildered, literally, in the wild dark.  But Lane advocates the spiritual practice of bewilderment as a way to get closer to God.

Plunge into the deep waters.  Be bewildered.  You’ll be surprised what you find. There’s more life in the deep than you expect.

(Thanks NOAA photographer Kevin L. Stierhoff, and thank you US taxpayers for this good use of our federal funds.)

Posted by Deborah Streeter at 7:07 AM No comments:

Such a lovely graveyard, don’t you think?

My sunset photo of the Point Pinos Lighthouse in Pacific Grove that I posted last week inspired some of you to share your own lighthouse stories, the hopeful assurance that fills us when we see these beacons in the rocky dark. 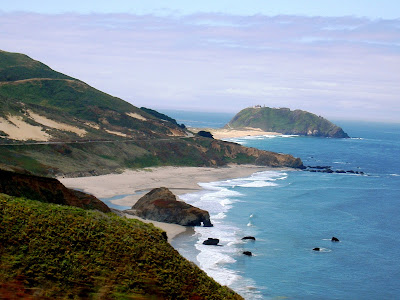 Hundreds of men and women shipwrecked at sea lie beneath these moody Big Sur waters. Sailors and passengers aboard scores of ships: trawlers, steam schooners, submarines and even a 1930’s dirigible. (Also some amazing rescues.)  Our weather is treacherous here on the coast; our rocks and reefs unforgiving.

Lighthouses are not all hope and romance.  The sea gives, the sea takes away - an old sailor’s proverb. Like roadside shrines after a traffic accident, lighthouses also announce, “We lost some good people here.  Be careful.  This place is dangerous.”

Our 15 National Marine Sanctuaries provide protection not only to their natural biological resources but also to shipwrecks, or what they call in government-speak, “submerged cultural resources.”  I learned this when I served on the Citizen’s Advisory Council of our Monterey Bay National Marine Sanctuary.  It is easier to convince Congress to authorize a sanctuary if there are shipwrecks there.  Besides Monterey Bay, two Marine Sanctuaries have remarkable shipwrecks: the Civil War ironclad ship “The Monitor” off the North Carolina coast, and Thunder Bay in Lake Huron, with its more than a hundred shipwrecked wooden side-wheelers and steel-hulled steamers.

And the men and women who died on board.

Sort of like our National Cemeteries, special protected places to honor our brave and tragic dead.

Sorry to be a little morbid here.  But you know, in the long view, we may all find a watery grave. From ashes in the earth to ground water and from ground water to river and to the sea.  “We all come from the sea, we all return to the sea.” I like that phrase better than the sea gives and takes away.

(My friend Joanne Semones wrote in her wonderful book, ‘A Sea of Troubles: The Lost Ships of Point Sur;’ “After Point Sur’s moody waters and mercurial weather claimed its share of hapless vessel, locals convinced the government to building a beacon atop its lofty monolith…It is an important portal to our past.”  Also the only complete turn of the (20th) century light-station in California open to the public.  Tours are fantastic.)


Posted by Deborah Streeter at 6:03 AM No comments: 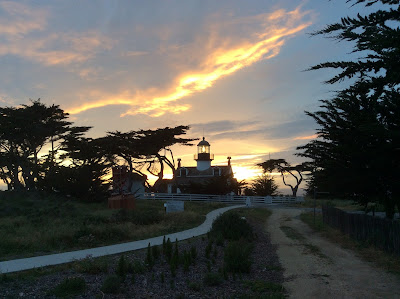 Sunset this week over Point Pinos Lighthouse in Pacific Grove, the oldest continuous operating lighthouse on the West Coast, 1855.

Lighthouses beckon and protect.  Their lamps shine bright over the dark deep. Mid storm at sea, a lighthouse brings us safely to shore.

Robert Lewis Stevenson, whose own family were lighthouse builders in Scotland, spent several months in Monterey in 1880, waiting for his beloved Fanny to escape her scoundrel husband and meet him in California. (A huge scandal, led to many happy years together.)

Stevenson wrote articles for the local paper while he waited.  In “The Old Pacific Capital” he describes the ocean and the day he walked all the way to Point Pinos Lighthouse:

“The one common note of all this country is the haunting presence of the ocean. A great faint sound of breakers follows you high up into the inland canons; the roar of water dwells in the clean, empty rooms of Monterey as in a shell upon the chimney; go where you will, you have but to pause and listen to hear the voice of the Pacific.

“One day — I shall never forget it — I had taken a trail that was new to me. After a while the woods began to open, the sea to sound nearer hand…. The Pacific booms in front. Westward is Point Pinos, with the lighthouse in a wilderness of sand, where you will find the lightkeeper playing the piano, making models and bows and arrows, studying dawn and sunrise in amateur oil-painting, and with a dozen other elegant pursuits and interests to surprise his brave, old-country rivals.

“To the east, and still nearer, you will come upon a space of open down, a hamlet, a haven among rocks, a world of surge and screaming sea-gulls…

“The whole woodland is begirt with thundering surges. The silence that immediately surrounds you where you stand is not so much broken as it is haunted by this distant, circling rumour. It sets your senses upon edge; you strain your attention; you are clearly and unusually conscious of small sounds near at hand; you walk listening like an Indian hunter; and that voice of the Pacific is a sort of disquieting company to you in your walk.”

(Come spend time with us at the Blue Theology Mission Station and we’ll visit the Lighthouse.   Its beacon may give you hope as you wait for new life, and then it may give you a guiding light home.  Bluetheology.com)

Posted by Deborah Streeter at 6:19 AM No comments:

On the first Earth Day, April 22, 1970, I was finishing up my freshman year at Stanford.  I had already learned so much!  Coed dorms. How to throw a pretty mean Frisbee.  That I was no longer one of the smarter people in the room.  That the amazing Dean of the Chapel (Davie Napier) wanted us anti-war protestors to meet in the large Memorial Church and hear Joan Baez and the Berrigan brothers sing and speak. So it was natural on April 22 that I took part in yet another massive protest and teach-in in San Francisco alongside tens of thousands of other folks.  But this one focused on clean air and water rather than napalm and the military-industrial-university complex. (Although we now know how interrelated these issues are.)

The guy in the picture is Denis Hayes, then recent Stanford grad and coordinator of the first Earth Day.  He helped plan nationwide events where 20 million folks marched demanding great environmental protection.  Because of that massive public momentum, the Nixon Administration was convinced to pass the Clean Air Act, Clean Water Act, the Endangered Species Act, The National Marine Sanctuary Program and to establish the Environmental Protection Agency.  (Remember when government did stuff?)

Seven years later, in 1977 I was back in California, now a student at Pacific School of Religion, and I took a course called “Eco-Logic” at Starr King School, the Unitarian Universalist seminary across the street. In the class we read Earnest Callenbach’s just published novel, Ecotopia, about a utopian community 20 years in the future (1999!) in Northern California/Northwest that was based on ecological principles, an influential novel that promoted many of the same values as Earth Day. (Still a great read.)  I think we went to an Oakland Earth Day march.

I got thinking about the 1970’s and Denis Hayes and Ernest Callenbach this week when I read these “Earth’s 10 Commandments” because Callenbach wrote them.

I learned at Stanford about the power of activism (we did bring the war to an end).  In seminary we learned about building communities that are sustainable and just.  And we learned that the Ten Commandments are really more like a Bill of Rights for such a covenant community, a description of how to live according to God’s righteousness.

A lot has changed since the 70’s, but this reworking of God’s call for a righteous Earth Community still rings true.

Thou shalt love and honor the Earth for it blesses thy life and governs thy survival.

Thou shalt keep each day sacred to the Earth and celebrate the turning of its seasons.

Thou shalt not hold thyself above other living things nor drive them to extinction.

Thou shalt give thanks for thy food to the creatures and plants that nourish thee.

Thou shalt limit thy offspring for multitudes of people are a burden unto the Earth.

Thou shalt not kill nor waste Earth’s riches upon weapons of war.

Thou shalt not pursue profit at the Earth’s expense but strive to restore its damaged majesty.

Thou shalt not hide from thyself or others the consequences of thy actions upon the Earth.

Thou shalt not steal from future generations by impoverishing or poisoning the Earth.

Thou shalt consume material goods in moderation so all may share Earth’s bounty.

(My weekly “Blue Theology Tide-ings” posts usually address ocean issues from a faith perspective.  Earth Day spends a little too much time on the green, and not enough on the blue, in my humble opinion. The ocean covers 70% of our planet’s surface - our planet should be called Oceanus.  Actually there is a World Oceans Day in June – our Blue Theology ministry celebrates then too!  Just remember that the ocean needs our activism and compassion as much as the dry land.)

Posted by Deborah Streeter at 6:52 AM No comments: