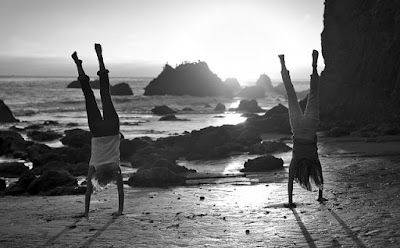 We’re booking 2018 inspiration time by the sea for youth and intergenerational groups and clergy renewal time at our Pacific Grove Blue Theology Mission Station.  Bluetheology.com
Posted by Deborah Streeter at 7:27 AM No comments:

This is where I’ll watch the parade on Thanksgiving Day.   Not the Macy’s Parade in NYC, but along my main street – Highway One in Big Sur. 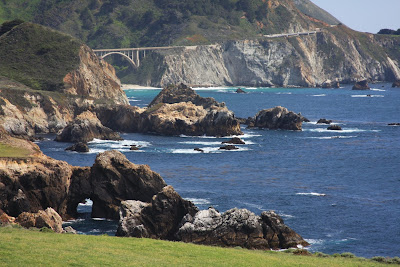 I’ll stand on these cliffs near my home and see (or imagine) a magnificent parade of marine plants and animals.

We here at the Blue Theology Mission Station join with our pelagic cousins to wish everyone a Happy Thanksgiving!

So much to be thankful for.  Check out <thankyouocean.org> Also bluetheology.com


(Thanks Steve Lonhardt from <sanctuarysimon.org> for the great photo.  An amazing free library of ocean photos, thanks to NOAA.)
Posted by Deborah Streeter at 6:39 AM No comments: We Americans who love the ocean (from sea to shining sea) have a choice.

We can accept the decision to pull out of the Paris Climate Accords (with its bare minimum efforts to improve ocean health; less CO2 means less ocean acidification, and less rise in temperature and sea level.)

Or we can say, with many US local governments, states like California, Oregon, Washington, New York, hundreds of universities, businesses and faith communities, representing more than 130 million Americans, “WE’RE STILL IN. We pledge to reduce our own energy use and change our lifestyles, for the sake of the ocean, even if our federal government won’t.”

Go to www.iamstillin.org or www.wearestillin.com and make your choice.  Sign up and make the pledge.  If you are part of a US faith community, look at all the other groups who have already said, “We’re Still In.”  A good conversation to be had at a council meeting, in a sermon, in prayer – are we in?

At this week’s UN Climate meetings in Germany the “We’re Still In” folks are very active, as is a broadly diverse international group of faith leaders with another great pledge you can make, which reads in part:

“…..We represent the world’s family of spiritualities, faiths and religions who share a profound gratitude for our precious planet.
“Earth is a blessing.  She supports life and is the basis of all our economies.  She conveys beauty and evokes our recognition of something greater than ourselves.  She is our temple, our mosque, our sanctuary, our cathedral.  Our home……
“…..As religious and spiritual leaders, we are committing to make changes in our own lives, and to support the members of our communities in doing the same.  Together, we come to you with an invitation to embark on a journey towards compassionate simplicity for the sake of the climate, the human family, and the community of life.
“For many of us, changes in three areas make the greatest impact: dramatically reducing emissions from our home energy use, adopting a plant-based diet and reducing food waste, and minimizing automobile and air travel……
“…. We wish to be clear that we understand that systemic change is required to solve this crisis.  We will continue to advocate for the policies that are so urgently needed…. And we know that our spiritualities and traditions offer wisdom about finding happiness in a purposeful life, family and friendships, not in an overabundance of things…..”  http://www.interfaithclimatestatement.org/the_statement

I wrote last week that I hope these weekly Blue Theology posts have more hope than despair.  Folks like “We’re Still In” and these interfaith activists inspire me and make me grateful.  Since many groups designate November a “gratitude month” I’ll suggest an action each week that can help us say “Thank You Ocean.”   This week:  Make your Pledge – We’re Still In!

I’m a comma person, I’m with the “Still” side, the Still Speaking and Still Acting Side, I’m Still In.

Our Pacific Grove Blue Theology Mission Station this past weekend helped 35 church youth and their 12 fabulous adult advisors learn about ocean stewardship, climate change and how we can act for justice for all creation.  We’re booking more groups (youth, intergenerational and clergy renewal) for 2018.  Bluetheology.com
Posted by Deborah Streeter at 6:48 AM No comments:

Have you thrown “away” your two plastic straws today?  Since every day Americans use and then trash (no such thing as “away”) over 500 million plastic straws, that’s what each of us do daily.  Calculated for our lifetimes - 38,000 plastic straws per person. 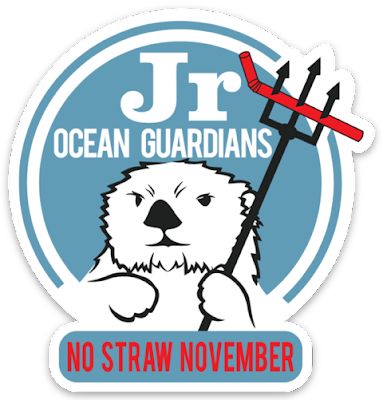 But if you simply say “No thanks, I’m not using straws this month,” (or “I have a nice metal reusable one with me,”) not only will you help the ocean, save the lives of marine animals and reduce the landfill – you can earn this cool Girl Scout patch (pictured).  Simply sign the “No Straw November” pledge and send $2 to http://www.jroceanguardians.org/no-straw-november.  You don’t even need to be a Girl Scout to get the patch, but local Girl Scout and San Benito High student Shelby O’Neil is getting her Gold Award (like Eagle Scout) for this project and lots of troops are part of the effort.  Help out Shelby!

Shelby got my attention because she is local, has convinced the cities of Monterey and Pacific Grove and the California Coastal Commission to endorse No Straw November, and even motivated Costco to stop offering plastic coffee stirrers for sale online.

But she’s not the first person to take on this scourge.  The fabulous Surfrider Foundation has a campaign “Plastic Straws Suck!”  Even the National Park Service asks its food concessions to be straw free.  Some efforts seek to ban plastic straws outright (the City of Carmel just did that, after school kids came to the Council meeting), others ask restaurants simply to ask before automatically giving you a straw - 70% of folks say no thanks.

Maybe the “gross-out” factor can help change our habits: Plastic straws are made of petroleum – that’s oil in our mouths.  Plastic never biodegrades, it just gets smaller and smaller, then it’s eaten by birds and turtles and fish.  So it ultimately ends up on our fish dinner plate and in our stomachs too.  Watch a really disturbing National Geo video by Googling “How did a sea turtle get a straw up its nose?”

I hope these weekly Blue Theology posts have more hope than despair.  Folks like Shelby inspire me and make me grateful.  Since many groups designate November a “gratitude month” I’ll suggest an action each week that can help us say “Thank You Ocean.”   This week: no plastic straw, please.
________

38 youth and their adult leaders from Disciples of Christ churches around Northern Cal. Are coming to our Pacific Grove Blue Theology Mission Station this weekend.  They’re doing the sermon Sunday, after visiting the Aquarium, praying for the ocean, picking up straws and other beach trash, collecting data on sand crabs and singing “Ocean is a Call to Worship.”  Hold us in your prayers!  Bluetheology.com I post here every Wednesday.
Posted by Deborah Streeter at 7:06 AM No comments: