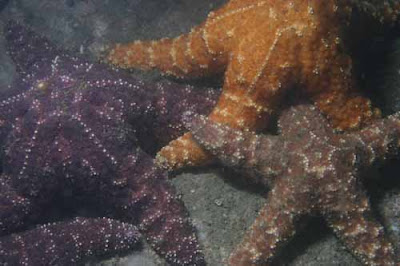 Posted by Deborah Streeter at 11:33 AM No comments:

Ocean March at the White House 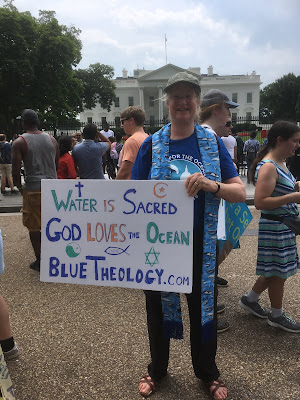 The Oceans are rising and so are we! 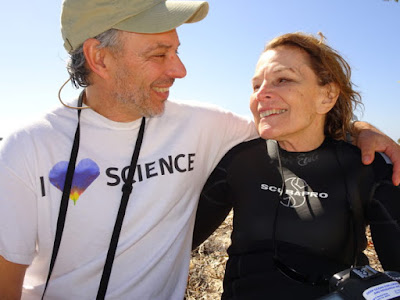 These two magi, wise ones from the east (Florida and Long Island) led off the March for the Ocean June 9 in Washington DC.  “Her Deepness” Dr. Sylvia Earle, and passionate wise man Dr. Carl Safina are my heroes, activist scientists and tireless advocates for the ocean.

Carl Safina, who grew up Unitarian Universalist and was the keynote speaker at the big religious leaders summit I hosted at the Monterey Bay Aquarium some years ago, wrote this blog for National Geographic about “Why We March.”  He says it better than I could.

“When the first World Oceans Day was held in 1992, the oceans were very different than today. The oceans were less acidic because less carbon dioxide had dissolved into them. They were a little cooler because the atmosphere was cooler. More large predatory fish like tunas and sharks existed, because they were less overfished. Tens of millions of tons less plastic was adrift. Oceans even had more oxygen.

“Yet even in 1992, the ocean had problems. Miles-long high-seas driftnets had just been banned but were still used illegally. Marine animals such as sea turtles, dolphins, and seabirds died in nets and longlines. The Newfoundland cod fishery had collapsed. Illegal dumping of trash and toxic waste was rampant. Oil was cheap, and pumping and shipping was causing spills and leaks. Shorelines on the southern coast of Alaska, were still drenched in sticky black crude from the 1989 Exxon Valdez disaster. Coastlines ecosystems were being bulldozed at rapid rates to make room for trendy high-rises and beachside communities.

“Since 1992, the world has allowed some of the oceans’ problems to worsen. But other problems have improved thanks to the work of many.

“World Oceans Day is meant to highlight all of this, the good and the bad. It’s meant to rally support for actions to help oceans recover from problems it faces now, but also to celebrate progress in repairing human harms to the seas.

“The Safina Center and Mission Blue are allies for oceans. The Safina Center has helped overhaul U.S. and international fishing policies and practices (sometimes more successfully than at other times). Mission Blue has established nearly 100 community-supported, IUCN-endorsed “Hope Spots”—places aimed at protecting the global ocean from some of our worst direct threats. We’re working to protect the sea, coastlines and the life they house.

“This World Oceans Day, we are calling on everyone to act for the oceans in three specific ways: We must prevent expansion of offshore drilling, we must end plastic pollution, and we need to make our coastlines more resilient. No boundaries can work against global warming, plastic pollution, oil spills, ocean acidification and coastal destruction. That’s why everyone—even those living far from the coasts—is needed to help the oceans.

“Here’s an overview of those three issues, and how you can take action to help address them:

OFFSHORE DRILLING
Trump’s Interior Department now plans to expand oil and gas drilling in 90 percent of U.S. waters, even as 60 percent of voters say they oppose the plan. In an attempt to protect their coastlines from probable harm, many states affected by Trump’s drilling plans have applied for exemptions to the Interior’s Bureau of Ocean Energy Management’s proposed Draft Offshore Oil and Gas Leasing Program, hoping to keep oilrigs out of their coastal waters.

Send letters to your elected representatives or the Department of Interior directly.

PLASTIC POLLUTION
Scientists estimate that the oceans will contain more plastic than fish by the year 2050. Why? Humans are using more single-use plastic products—like packaging, bags, bottles and utensils—now than ever before. Marine animals are consuming plastic debris at unprecedented rates, especially tiny pieces of broken-up plastic called microplastic that often contain toxins.

You can combat Earth’s growing plastic pollution problem by recycling and by looking for innovative new materials made from ecologically benign materials—such as algae, hemp and vegetable starches—that can begin to replace plastics.

COASTAL RESILIENCE
More than 40% of the world’s population lives within 100 miles of a coastline. But instead of building more on coasts where communities are vulnerable to increasingly severe storms and flooding, we recommend dune protection, enhancement of wetland habitats and the creation of oyster reefs to help dampen the impacts of storms.

You can support coastal resilience projects by voting for policymakers and policies that back coastal conservation efforts, instead of more and more-risky development.

“We’ve made a lot of progress. But we acknowledge that we still have a long way to go.

“That’s why we are participating in the March for the Ocean in Washington, D.C., on Saturday, June 9: To tell our government the oceans URGENTLY need help. Come, join us, either there or in a city near you!”
Sylvia Earle is Founder, Mission Blue; and National Geographic Explorer in Residence. Carl Safina founded The Safina Center and is Endowed Professor for Nature and Humanity at New York’s Stony Brook University.
_________________
Our Blue Theology Mission Station in Pacific Grove took part in the Ocean March and added to the wonderful wet mix of marchers God’s call for love and justice for all creation.  www.bluetheology.com. I post these ocean devotionals every Wednesday here and at www.bluetheologytideings.blogspot.com.