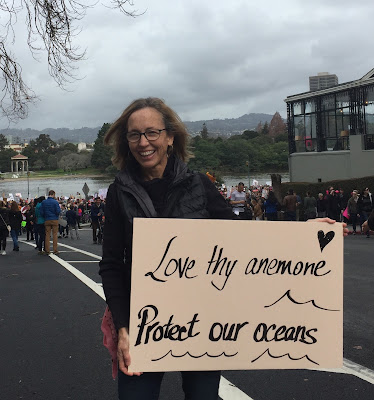 What a delight to run into my friend Toni from our Aquarium shift among the 60,000 people at the Oakland Women’s March!  Check out her great sign!

Every Thursday morning Toni and I (and our shift) spend four hours trying to help a few thousand Aquarium visitors to (in the words of its mission statement) “be inspired to do ocean conservation.”  With this one simple homemade sign Toni inspired many thousands more.  Thanks, Toni.

I was pleasantly surprised to see so many pro-science signs at the March.  “Science Trumps Opinion.”  “Tolerance, Reason, Facts – Make American Think Again.”  “Climate Change is Real.”  (Did you see the photo of the scientists at the Antarctic holding signs like “Penguins for Peace”?!)

Love thy anemone!  We could just leave it at that.  Our Blue Theology gospel for the day is that we are called to love all of creation, and that includes anemones, those amazing sea animals that look like flowers (hence their name) and carpet the reef like a vast multicolored ocean garden.

But if you want to do a little more scriptural analysis of Toni’s pun, she’s right up there with Jesus on the use of parable and paradox.  Anemones look and act strange, maybe scary, but they are not our enemies.  And even if they are, according to the sign/text, we are supposed to love them.  Amen.

Oh sure, like their cousin sea urchins, anemones can sting.  But that’s how they get dinner. If you attach to a rock for life, how are you going find food, and how are you going to escape predators?  A gentle sting (it doesn’t hurt humans) snags a yummy fish or repels a predatory crab.

Likewise I think we often label as “enemies” those whose ways of surviving (finding dinner and not being someone else’s dinner) are different for our own.

But when we encounter someone that seems like an enemy (or actually is an enemy,) Jesus and many others urge us not to fear or hate them, but to love them.  Love thy enemies.  And thy anemones.  Consider the anemones of the field.  Love and protect them.

I write this Blue Theology column each Wednesday.  I also write another weekly column, “On the Road Again,” about walking, pilgrimage, caminos.  This week I tell there another story about the March and a different sign I saw, a quote by Voltaire!
http://www.thebackroadcafe.com/on-the-road-aga-by-deborah-str/2017/1/24/voltaire-at-the-womens-march.html

Posted by Deborah Streeter at 7:13 AM No comments: 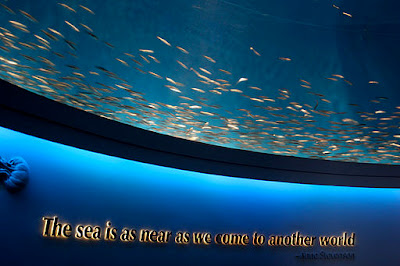 “A cool way to look at this school of sardines is to lie down here on the floor and just look up,” I said to the group of rowdy teenagers, on a mission trip with our church’s Blue Theology Mission Station program, as we entered the Aquarium’s fish roundabout exhibit.

Leading “spiritual tours” of the Aquarium, we try to encourage some silent time. “For the next few minutes let’s just look and listen.”  This can be hard for these eager, gabby adolescents. (Actually, on our adult retreats it’s not much easier.)  Now she wants us to lie down quietly in the middle of a noisy crowd?

But as the fish silently schooled round and round, the teens seemed to sink into the carpet, and sort of lined up themselves like a little fishy school, together in their own silence and awe, eyes and mouths wide open following round and round the silver circle.

“How do they stay together in the school, how do they know which direction to go, is there a leader?”

No, it’s their lateral line.  All fish have it, along their side, a line of open nerve endings extending head to tail.  It can sense the smallest of motions from the fish beside them.  A tiny wisp of water displacement may signal the approach of a predator, and every fish will instantaneously flick with its school in a different safe direction. Likewise, the motion of possible incoming food – everyone turns and hunts together.

And for finding a mate?  Let’s just say the lateral line is very sensitive.

I said to one of the adult leaders, “Can you imagine if people were that sensitive, could feel immediately what was going on with everyone around them?”  And she said, “Well actually, lots of people, especially kids, are extremely sensitive to the moods and actions of others.  That can be very emotional for them, but also it means they care.  Sometimes I think we try too much to harden those feelings out of our kids,” she said. “We tell them - don’t you worry so much about other people, only take care of yourself.  To their loss.”

I’m trying to pay more attention to my lateral line.  And to my silvery comrades.

(I’m reposting this from a Wednesday in   May 9 we will host church educators and clergy for a special Blue Theology Day in Pacific Grove, including a visit to the Aquarium.  Be in touch – use your lateral line!  Bluetheology.com)
2015, but the sardines are still there!
Posted by Deborah Streeter at 5:55 AM No comments: 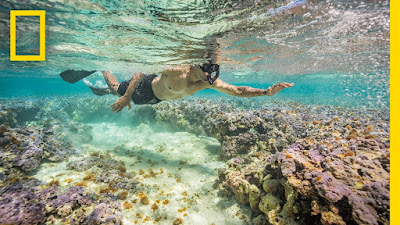 I want to thank Barack Obama, George W. Bush and Richard Nixon for having been such great Ocean Presidents.
I mean it.

Barack Obama and George W. Bush both changed the face of ocean conservation with bold executive acts.  They created over a million square miles of marine protected areas in the Pacific and Atlantic Oceans, formed new ocean protection agencies, brought ocean scientists to the White House, and insisted of good funding for science in the study of oceans.

But we should go back to Richard Nixon and give him a big thank you also.  We forget that the citizen activism in the 60’s and the first Earth Day, 1970, inspired (and pressured) him and Congress to establish the EPA and NOAA, and to pass the Clean Water and Air Acts, the Endangered Species Act and the Marine Mammal Protection Act.  Nixon signed all those bills.

Presidents can do a lot to help the oceans.

Near the end of his presidency George W. Bush, who grew up swimming off Maine and in the Gulf, invited ocean science giants Jean-Michel Cousteau and Sylvia Earle for dinner, because he wanted to leave a legacy in ocean conservation.    (He said Earle “gave me a pretty good lecture about life.”)  Not long after, he established the then largest US marine protected area, the huge Papahānaumokuākea Marine National Monument west of Hawaii (named for a Hawaiian creation goddess.)

Like Bush, Barack Obama grew up swimming.  (The pic is of him snorkeling in Hawaii.)  He established the first Ocean Policy Council, supported using science in the study of ocean protection and climate change, and added more protected areas.  He is reported to have successfully pressured China’s leaders to join 23 other nations to create the largest international marine protected area in the Ross Sea off Antarctic.  The latest issue of the Atlantic has a good summary of his many ocean actions.

There is no one Ocean Department in our government.   It can be hard and confusing to track government ocean policy and actions, or to influence them, because so many different agencies address the oceans, and not always consistently.  NOAA (which includes oceans, fisheries, weather, surveys, all science based) is part of the much larger Department of Commerce.  The EPA is a separate agency but not cabinet level, and addresses land more than ocean issues.  The Dept. of the Interior manages federal lands, and has empowered presidents since Teddy Roosevelt to authorize permanent Monument status for areas on land and sea.

Maybe this is a good thing.  Oceans aren’t just isolated entities that can be confined to one department – they affect and are affected by security, weather, commerce, environment, shipping, tourism, fisheries, mining, oil and gas, aquaculture, water quality, climate change.  Almost every government agency should ask itself, “What about the oceans?”  And I’m just talking federal.  States and local communities have ocean policies also, and are sometimes easier to influence.  But it’s a big ocean.

For now, in our transition to a new president, if you love the oceans, pay attention to what’s happening at NOAA and the EPA and the Dept. of the Interior, and to executive actions.  And writing a thank you note to Bush and Obama would be a nice thing to do also.
_______


I write these “Blue Theology Tide-ings” every Wednesday.  Bluetheology.com.  May 9 – Blue Theology Retreat and Resource Day for Religious Leaders.
Posted by Deborah Streeter at 6:12 AM No comments: