A Marshallese sailor stood in his outrigger and wondered, “Which way will the ocean currents take me?”  “How can I get to Namu Atoll?”  “The wind is blowing out of the west, so where will the biggest swells be?”

Actually, our imagined seasoned sailor already knew all the answers, because he had woven one of these “navigation stick charts.” 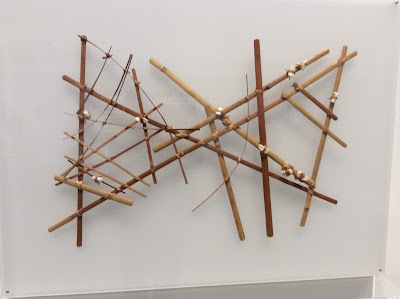 (That’s what the anthropologists call them.  The sailors call them rebbelibs, medos and mattangs, depending on their precise function.  These are over 100 years old.  These days  of course the sailors use GPS.)

With the straight “sticks” (really coconut fiber) the weaver marked the known ocean currents; those will bring consistent, predictable waves.  The curved lines indicate ocean swells, sometimes called “wind waves.”  These are less predictable, and their strength and direction can change with the weather.

And the little cowrie shells?  Those are the Marshall Islands.  If you are sailing amid 29 coral atolls and over 1100 individual islands, it’s good to have a map to help you find your way home. 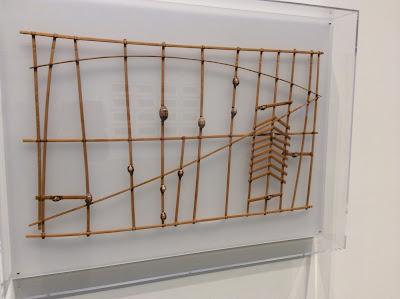 I saw these two last week at the new Berkeley Art Museum, part of an inaugural exhibit called “The Architecture of Things.”  With works by the likes of Georgia O’Keefe and Buckminster Fuller, the exhibit “considers architecture as a potent model for our capacity to reimagine and shape the world around us.”

As these sailors imagined the sea with fiber and shell.

Would I have known what they were if I hadn’t looked at the label?  They could have been Cubist art or contemporary minimalism.

And what was my reaction when I saw they were originally from the Anthropology Museum? In what circumstances were they removed from the Islands and brought here?  The label is a little condescending, describing how “ the beautiful geometric forms enabled the adept navigators to make their way across the inconceivable vastness of the sea.”  Such clever primitive folks, so artistic!

I couldn’t help but think of the Islands’ sad history at Western hands; colonization,  relentless nuclear testing in the 50’s and now the dubious distinction of being ground zero for climate change-induced ocean level rising.  Their home is drowning.  No map will guide them home.

So the art map, the map art, did what art is supposed to do.  It made me pause, wonder, admire, weep, cringe, research, write, think, regret, admire some more, ponder, share.  Pretty good job by the new museum.

(I  post all these Wednesday “Blue Theology Tide-ings” reflections here and on Facebook.  I am wondering about publishing them somehow…ideas?)

Oh, there once was a puffin

Just the shape of a muffin
And he lived on an island
In the bright blue sea.

But the poor little puffin
He couldn’t play nuthin’
‘Cause he didn’t have no one
To play with at all.

Then along came some fishes
And they said, “If you wishes,
You could have us for playmates
Instead of for tea.”

So they all play together
In all sorts of weather,
And the puffin eats pancakes
Like you and like me.


I memorized this poem, by Florence Page Jaques, as a child, and I considered it an important part of my own children’s education. I will recite it still at the very slightest urging.

When the Aquarium expanded the Open Sea Wing to include a puffin exhibit (along with other alcids, diving birds, like murres and guillemots,) I recited the poem (more than once I’m afraid) for my guide shift.

I even called the Exhibits Department and suggested they include this classic poem in the signage.  This was not the first time that the Exhibits Dept. has ignored one of my great suggestions, but I offer it today for my faithful Blue Theology Mission Station readers.

It doesn’t really need a moral.  Like most poems it can stand alone.  But in case you need interpretive help, may I suggest:

-Don’t eat your friends.
-Invite those who would devour you to play instead.
-When in doubt, make pancakes.
-Check out <puffinpalooza.com.>
-Google “There Once Wasn’t A Puffin Anymore” if you want a very sad climate change-inspired last verse, but it’s really a downer.
-Learn some more fun facts about puffins, such as:
-They can beat their wings up to 400 times a minute.
-Their scientific name “fratercula” means “little brother” because they look like little monks.
- One expert says, “Although the puffins are vocal at their breeding colonies, they are silent at sea.”

A time to be noisy and a time to refrain from noise.  Probably a good way to live.


Posted by Deborah Streeter at 6:22 AM No comments:

"Remember You Are Ocean, and to Ocean You Shall Return..."

“Remember You Are Ocean, and to Ocean You Shall Return…..”

It’s Ash Wednesday.  But instead of ashes, let us anoint our foreheads with seawater.  And call it Wet Wednesday.

You have heard, “From dust you have come, and to dust you shall return, repent…..”  But here at the Blue Theology Mission Station we say, “Yes, our origins are humble, but we were not born literally from dust (just as the Bible is not literally a science textbook!) 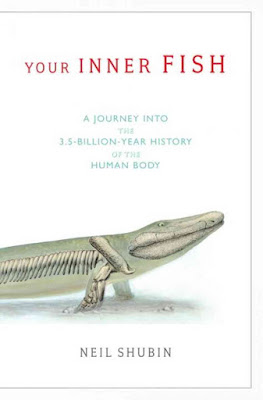 No, we were born of water, from the primordial seas, where all life began.”

So I’ll tell you again (I wrote about this last Ash/Wet Wednesday) of a favorite spiritual text, Your Inner Fish by University of Chicago paleontologist Neil Shubin. (Also a PBS special.)  He discovered the fossil Tiktaalik, the animal that transitioned, 365 million years ago, from sea to land.   She has fishy fins and scales, but also the beginnings of hands and a neck.

She is our saline Eve.

Shubin explains, clearly and with wit, how so many parts of our bodies bear the marks of our origin in the sea. “We are not separate from the rest of the living world, but part of it down to our bones.”

For example, our salty tears, our salty blood, our salty sweat – they are all the exact same salinity of the sea, legacy of our birthplace.

And even our mother’s amniotic fluid – a salty inner sea.

So if we cry today in repentance, our tears are sea salty. If blood is a symbol of Lenten sacrifice, our self discipline is sea flavored.  Our Lenten journeys may raise a sweat, which comes with that yummy sea smell.  Pregnant waiting for Holy Week death and new life – an oceanic womb.  Our bodies still swim in that sea of Eden.

Wet Ash Wednesday is a day to repent; we have followed too much the devices and desires of our own hearts.  Let us confess our failure to honor the womb of our creation, mother sea.

Remember that we are in good company on our Lenten pilgrimage by the sea.  Our marine brothers and sisters, mothers and fathers long for us to walk (swim?) humbly with them and with our God.

Posted by Deborah Streeter at 5:16 AM No comments:

Would anyone send a Valentine to these ugly creatures? 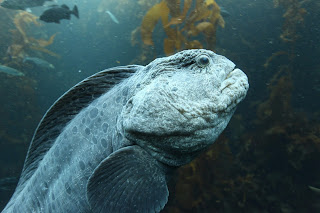 Of course! Their beloveds would!  The wolf eel (left) mates for life (with another 8 ft. beauty.)  That could be 25 years in the same rocky crevice.  That’s a lot of Valentines. 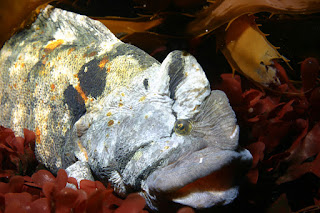 Monkeyface eels (below), smaller but no less lovely, prove their love by fiercely guarding their nest of babies, after the female has deposited up to 45,000 eggs there.  That’s a lot of love.

When Aquarium visitors see these two fish at the bottom of the Kelp Forest Exhibit, they  often make fun of their ugly mugs.

It hurts their feelings.

Well, I don’t know if it does, but I spring to their defense.  “There is no ugly in nature,” I insist.  “I’m sure their mothers love them,” I say confidently.  “They remind me of the two old guys in the balcony in the Muppet Show – just as adorable, don’t you think?”

I got the idea of featuring these animals this week in my weekly Blue Theology post because of Chinese Lunar New Year – it’s the Year of the Monkey.  But actually the monkeyface eel looks as little like a monkey as its friend looks like a wolf.  Someone gave them these names to make us scared of them or make fun of them.

Don’t!  They are beloved children of God.

I like how The Message translates the part of the Genesis about the creation of fish (and birds, Day Five.)

God spoke: “Swarm, Ocean, with fish and all sea life!
Birds, fly through the sky over Earth!”
God created the huge whales,
all the swarm of life in the waters,
And every kind and species of flying birds.
God saw that it was good.
God blessed them: “Prosper! Reproduce! Fill Ocean!”

As long as we are quoting Scripture;

“You are altogether beautiful, my love; there is no flaw in you.”  (Song of Solomon)

“I am fearfully and wonderfully made.  Wonderful are your works, O God; my soul knows it well.” (Psalm 139)

(A valentine to Chad King, NOAA, for more great photos.)

Posted by Deborah Streeter at 5:42 AM No comments: