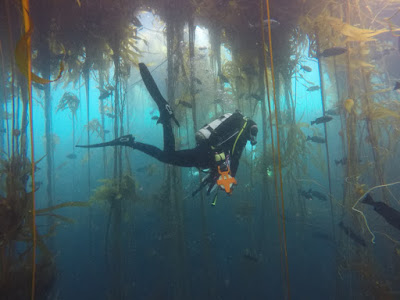 They died at sea, bodies falling into the dark depths they loved so well.

My heart goes out to the friends and families of the 34 scuba divers who died early Monday morning in a horrific fire, on a boat named Conception, off the Channel Islands near Santa Barbara.

So many divers whom I know, when I have described my Blue Theology ministry of ocean stewardship and ocean spirituality, have told me, eyes lighting up, how diving is for them a spiritual experience, that underwater they feel close to some mysterious higher, or actually deeper power, filled with silent awe and wonder.  “That’s my church,” they say.  They are also generous folks, evangelists almost for their spiritual practice.  When I served on the Citizen’s Advisory Council for the Monterey Bay National Marine Sanctuary, the Diving Representative offered all of us Council members free diving lessons.

Which I took, but it turned out I was not a strong enough swimmer or brave enough – snorkeling is my preference.

And fabulous snorkeling I did off those same Channel Islands 12 years ago from a boat almost identical to the one named Conception that burned in minutes this week.  It was even the same company, Truth Aquatics out of Santa Barbara, and with a group of Point Lobos State Park Docents we too spend three days sailing around the five islands, snorkeling, hiking.  Our boat was the Conception’s sister ship – the Truth.  The crew gave us a serious and comprehensive safety lecture.  We slept in bunks like those the divers did, below deck, stacked and close.  We saw wonders and beauty beyond imagining.  I came home with memories and a sweatshirt that read “There is No Substitute for the Truth.”

The Channel Islands are near California’s Point Conception, the marker between Southern and Central California, where warmer and colder currents meet, a magical spot.  So named by Spanish explorer Vizcaino in 1602 when he sailed by on Dec. 8, the Feast of the Conception, the supposed date Jesus’ mother Mary was conceived.

The boat “Conception” was meant to “begin” a fabulous journey and adventure for those 34 divers.  Some were young, a teenager, some seasoned divers in their 60’s.  All were surely excited about this new beginning.  Instead it was a tragic ending.  We for whom resurrection offers promise can hope that their deaths were more a “passing” than an ending.  But the pain and loss are as deep as the sea.

Bluetheology.com for info on our church’s youth service trips and adult pilgrimages along Monterey Bay.  I leave Friday for three weeks in the UK, including a seminary conference, “Blue Planet, Blue God,” at Cambridge University– others doing Blue Theology!  And then walking across England, Hadrian’s Wall, Newcastle to Carlisle, 90 miles in 7 days, from North Sea to Irish Sea with a dear walking friend.  I may post some pics, but probably not these regular Wednesday postings.  Hold my knees and feet in your prayers!  Photo: Steve Lonhart, NOAA

Posted by Deborah Streeter at 6:06 AM No comments: