“If there is magic on this planet, it is contained in water.”

This first sentence of Loren Eiseley’s essay, “The Flow of the River,” (1946) is etched on the wall near the Kelp Forest exhibit at the Aquarium.

The essay tells of a magical, mystical experience he had on a summer afternoon floating down the Platte River, where he became the water:

“I drifted by stranded timber cut by beaver in mountain fastness…  I was streaming alive through the hot and working ferment of the sun, or oozing secretively through shady thickets.  I *was* water and the unspeakable alchemies that gestate and take shape in water, the slimy jellies that under the enormous magnification of the sun writhe and whip upward as great barbeled fish mouths, or sink indistinctly back into the murk out of which they arose.

“As for men, those myriad little detached ponds with their own swarming corpuscular life, what were they but a way that water has of going about beyond the reach of rivers? …I was three fourths water, rising and subsiding according to the hollow knocking in my veins; a minute pulse, like the eternal pulse that lifts Himalayas, and which, in the following systole, will carry them away.”

I’ve been rereading J. R. R. Tolkein’s essay “On Fairy-Stories,” about the power of enchantment, and magic.  It reminded me of that Eiseley quotation, which I see every Thursday on my volunteer guide shift.

Tolkein and Eiseley were rational minded academics who were not embarrassed to profess their faith in magic and mystery.

In his essay, first a 1938 lecture at the University of St. Andrews, Tolkein addresses the entire realm of Faerie, not just the cute tales; “Faerie contains many things besides elves and fays, and besides dwarves, witches, trolls, giants or dragons: it holds the seas, the sun, the moon, the sky; and the earth, and all things that are in it: tree and bird, water and stone, wine and bread, and ourselves, mortal men, when we are enchanted.”

In his “Lord of the Rings,” it is with the elves, at their river home in Rivendell, and in Lothlorien, that enchantment happens.

“Frodo stood awhile [listening to the elves singing] still lost in wonder. It seemed to him that he had stepped through a high window that looked on a vanished world. A light was upon it for which his language had no name…. He saw no colour but those he knew, gold and white and blue and green, but they were fresh and poignant, as if he had at that moment first perceived them… On the land of Lórien there was no stain. He turned and saw that Sam was now standing beside him, looking round with a puzzled expression, and rubbing his eyes as if he was not sure he was awake. ‘It’s sunlight and bright day, right enough,’ he said. ‘I thought the Elves were all for moon and stars: but this is more elvish than anything I ever heard tell of. I feel as if I was inside a song, if you take my meaning.’”

Enchantment is, literally, being “in the chant,” inside the song.

The enchantment of water is like being inside a song.

If you take my meaning. 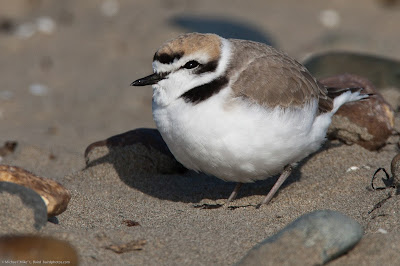 “Can you imagine being forced from your land into exile?  These little ones have lost home and family.  These are our brothers and sisters.  We must reach out a hand to help them. Here, take this trash bag and go forth.  Together we can help the snowy plovers return from exile,” I preached to the group of church volunteers in the Marina beach parking lot.

Well, I would call it preaching.  They probably thought of it as orientation.  I was hoping my altar call would embolden these volunteers, from a church conference at Asilomar, to climb up on the cold windy sand dunes. There trespassers had left broken beer bottles, and non-native plants had invaded.  And the plovers had left.

The once large tribe of the snowy plovers, now a tiny remnant, was abandoning home and hope.  We call it habitat loss, when a species can’t find a home neighborhood with food, safety and a place to have babies.  Snowy plovers, compact little white birds with a brown collar, lay their eggs right on the sand, no nest, no high branch to avoid predators like foxes.  And being a little skittish, or cautious, one might even say savvy, when a threat approaches, like a hiker, a dog, or a condo, the birds abandon their eggs.  All three of these threats frequent our Central Coast dunes, and the snowy plover tribe has shrunk to less than1500 little souls.

To amplify my altar call, I had invited a member of Friends of the Snowy Plover to tell our 30 volunteers about their work.  These good folks also walk the dunes, but instead of trash, they pick up those abandoned eggs, and gently carry them to the Monterey Bay Aquarium, where surrogate mom snowy plovers hatch the orphans.  Then they release the babies back to their promised land.  (They also advocate for protecting the dunes, making them plover sanctuaries, dog free.  No success there yet…)

So we set to work, doing our best to prepare a table for the snowy plovers in the midst of their enemies. After two hours we dragged back to the parking lot many bags laden with trash and many hearts full of hope.  Progress not perfection.  Come on home, little ones.

(Our Blue Theology Mission Station hosts youth mission trips and adult pilgrimages, short and long. We usually do some kind of beach cleanup or restoration and we always see the snowy plovers at the Aquarium.  Bluetheology.com)
Posted by Deborah Streeter at 5:57 AM No comments: 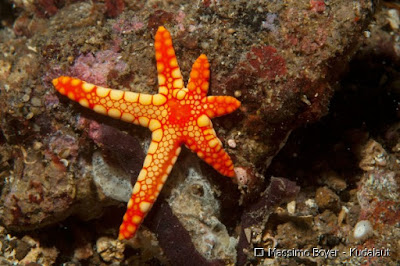 Posted by Deborah Streeter at 6:15 AM No comments:

Had I lived in ancient Greece, I would have worshipped Poseidon, the mighty ocean god. Sailing with my Norse ancestors, we would have offered sacrifices to Nehalennia, goddess of the North Sea.  I would surely have bowed down before Tiamat, Babylonia goddess of the sea, and of chaos, and mother of all gods.

No matter the pantheon, I look for the ocean deities, and give them respect and honor. 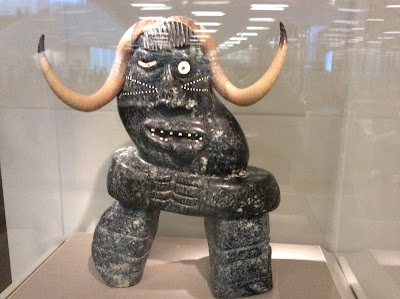 So when I visit the Inuit art collection at the De Young Museum in San Francisco, I always stop to honor Inukshuk, Spirit of the Arctic.  (I pretend Inukshuk is a goddess, because of the cool hair.)

On my pilgrimage this week I learned about the “Poets in the Galleries” program; the museum welcomes 3rd-7th graders to write poems about the artwork.  Fourth grader Aidan Mccartt wrote about Inukshuk:

(These Wednesday posts celebrate ocean spirituality and stewardship.  Learn more about our youth mission trips and adult pilgrimages at bluetheology.com.  This past week we hosted a great group from St. Andrew’s Lutheran Church in San Mateo.)

(I write another weekly column about building and all things structural; this past week the subject was hermit crabs – renters or owners?  Check out http://www.thebackroadcafe.com/building-blocks-by-deborah-str/)

Posted by Deborah Streeter at 6:11 AM No comments: