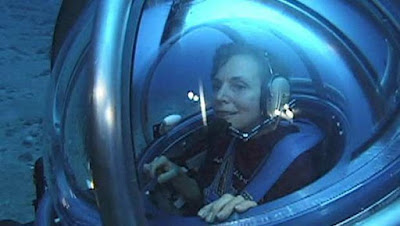 Fans of Dr. Sylvia Earle (myself included) so respect her for her ocean science and advocacy that we call her “Her Deepness” and “The Sturgeon General.”

Now 80, this diver, scientist, explorer, advocate, aquanaut was the first female chief scientist for NOAA, Time Magazine’s first Hero of the Planet (1998) and is currently National Geographic Explorer in Residence.

I heard her speak last week here in Monterey.  I highly recommend the film “Mission Blue” that she made with (and you can see it on) Netflix, about her life and her work, as well as her many YouTube talks, and her award winning TED talk.

Not just a world class scientist, she is a tireless advocate and a fantastic interpreter of ocean issues for the public.  And she has her own Lego figure!

I’ll hand the rest of this week’s Blue Theology posting over to her:

“The most valuable thing we extract from the ocean is our own existence.”

“No child left dry – get them out there in the ocean!”

“I wish you would use all means at your disposal – films!, expeditions!, the web! new submarines! – to create a campaign to ignite public support for a global network of marine protected areas, Hope Spots, large enough to save and restore the blue heart of the planet.”

“I want everyone to go jump in the ocean to see for themselves how beautiful it is, how important it is to get acquainted with fish swimming in the ocean, rather than just swimming with lemon slices and butter.”

Earle travels 300 days a year, lectures, lobbies, visits and dives in the now 50 official Hope Spots in the world’s oceans, large marine protected areas.  She is passionate and  hopeful.

The day after I heard her speak she was on her way to see Laura and George W. Bush – she wanted to thank Pres. Bush for designating the then largest Hope Spot, in Northwest Hawaii (Obama has since designated more) and she intended to encourage them to do more for the oceans.

Get ready, Bushes, to honor and obey Her Deepness.

Posted by Deborah Streeter at 8:56 AM No comments:

I first got to know the Benedictine monks of the New Camaldoli Monastery on the Big Sur Coast 10 years ago when a small group of coast activists came together to challenge the US military.  At our first meeting their clean long white robes stood in sharp contrast to the Big Sur aging hippies (like myself!) But the monks emerged as leaders in our cause. 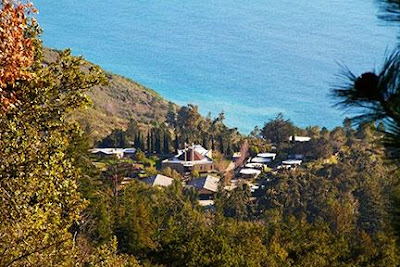 The US Navy had, without notice, started flying bomber jets on daily test runs, very low and loud, from Ft. Hunter Ligget, neighbor of the monastery, along the coast and out over the ocean.  Not only were these flights a shocking intrusion into the peace of the monks and their many retreatants, but it was crazy to see one federal agency, the Navy, wrecking havoc on the long hard work of another federal program, US Fish and Wildlife’s decades long patient program, in that same Big Sur wilderness, to bring the California condor back from the brink of extinction.

Talk about David and Goliath.  But with much effort we were ultimately successful in stopping the Navy’s flights, with the help of our Member of Congress Sam Farr.  I am sure that those white robed monks at the rallies and many meetings had a huge influence.

Later I met the monks again at another meeting.  (These monks don’t just spend all day in contemplation, even though their great website is <contemplation.com>.  Like all religious leaders, they have to go to a lot of meetings.) This one was the Four Winds Council, a fantastic cooperative effort of four spiritually based groups who all offer hospitality in the Ventana Wilderness: The Esalen Institute, the Monastery, the Essalen Nation of native people (which offers guided trips into the wilderness), and Tassajara Zen Center.  They draw from different traditions, but share times of spiritual renewal (they had just been in a sweat lodge together) and strategies (that day it was plumbing problems.) 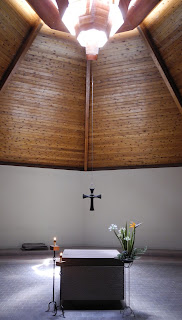 You might expect me to say that my favorite times with the monks were the more “spiritual” ones.   I do love worshipping with them at their noon sung mass in the splendid chapel.  (I did that recently on a business trip down the coast, planned the trip with a stop there.)  Some years ago I spent a restorative three days in their remote hermitage in solitary silent retreat.  My spirit is fed just visiting the great bookstore and taking in the view 1300 feet above the rugged coast.

But I am forever grateful that our coast is silent and the condor babies are surviving.  That’s a deeply spiritual gift from the monks.

(On our Blue Theology youth mission trips and adult retreats we don’t get as far south as the Monastery, but we do spend time at closer holy spots – Carmel Mission, the UCC Community Church labyrinth, and of course our own Christian Church sanctuary in Pacific Grove.  Oh yeah, and another sanctuary, the Monterey Bay National Marine Sanctuary.  Church and state sometimes mix very nicely, as when monks challenge bombers and governments name protected areas “sanctuaries.”)

(We are booking groups for 2016.  Check out bluetheology.com)
Posted by Deborah Streeter at 6:20 AM No comments:

If autumn needs an official fish, let’s make it this garibaldi fish.  So wonderfully orange. 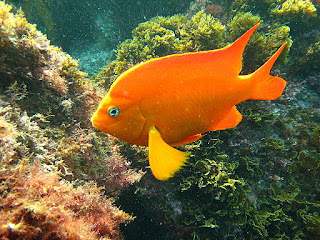 The garibaldi is the California State Marine Fish.  All official California things are golden/orange – Golden Gate, Golden State.  Our state Freshwater Fish is the golden trout.

(I even heard a state water conservation ad that said, “Water your fruit trees, but let your lawns go golden!”)

Why “garibaldi?”  The uniforms of the Italian liberator’s soldiers were this color.  Actually, the fish do remind me of little soldiers in the kelp forest; the males aggressively defend from predators the nest of eggs they have fertilized, darting around like sentry guards.

It seems like orange is everywhere this fall.  I’ve seen it in the eclipsing harvest moon, and at the roadside pumpkin patch.  I drive under a canopy of orange sycamore leaves in our canyon. I made a fall stew yesterday, carrots and yams, spiced with mace and cloves.

“Season of mists and mellow fruitfulness
Close bosom-friend of the maturing sun
Conspiring with him how to load and bless
With fruit the vines that round the thatch-eves run….”

My garibaldi friend shines like a California gold nugget.  It serves and protects like a determined orange-coated sentry.  So fruitful, it could be a loaded, ripening pumpkin on a vine.  This little round orange ball – it’s like a mellow autumn sun.

Thanks fall, thanks sun, thanks garibalidi , all close bosom-friends, for conspiring to load us with more blessings.

Happy autumn, from beneath the waves.
Posted by Deborah Streeter at 6:27 AM No comments:

I was invited to a Blessing of the Animals this past Sunday and I offered to bring a sea creature of some kind, to round out the usual dogs and hamsters.  The good folks at La Selva UCC said, “We’ll give you a table for your sea creature, and please say something at prayer time about it and your ministry around ocean stewardship and spirituality, Blue Theology.”

Later I thought - Wait!  I’m all about protecting the ocean.  I keep saying we should treat animals as subjects and not objects, some ONE I have an I-Thou relationship with, not some THING I would use just for my needs.  How can I take a precious creature out of its home for “show and tell” at church? 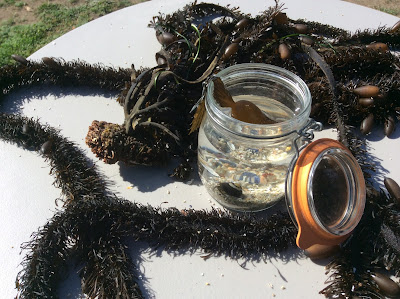 I consulted my Monterey Bay Aquarium friends about my dilemma: keep my promise and honor St. Francis or leave well enough alone?  They suggested an acceptable compromise – find one hermit crab in an ocean tide pool, put it in a big jar with sea water, take it to church, ask God to bless it, and return it promptly to its home.

So early Sunday morning found me in my church clothes at my favorite secluded rocky beach, poised over crashing waves with my jar – voila, my little hermit.  I picked up some lovely feather boa kelp also, as an altar cloth, and to make little Hermy feel at home on the table.

At prayer time I said, “I brought for our blessing today a hermit crab, to represent the millions of sea creatures that Francis, and God, include in the family of all creation.  I thought it was appropriate to bring a hermit crab, because it reminds us of the great monastic tradition of which Francis is a part.  (Get it? Hermits?)  And because, as an animal born without a shell, it represents the homeless and vulnerable that Francis so loved.  As the hermit crab grows, and seeks to find an empty shell to move into, we remember how we can stand in solidarity with the homeless, and offer what we have (our empty shell?) to those in need.”

Or something like that.  I was sort of kidding.  And sort of not.  It really was holy, this
holy hermit (crab.)

I dropped it back in its tide pool on my way home, and added my prayer of thanks.
Posted by Deborah Streeter at 5:41 AM No comments: