Poetry is an Island

Poetry is an Island 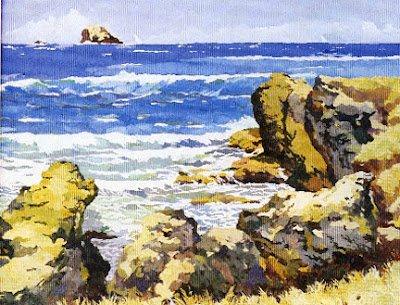 “My first friend was the sea,” is a line from a Derek Walcott poem.  In his 1992 Nobel Prize address, he said “Poetry is an island that breaks away from the main.”

Poet, playwright, painter, Walcott died last week beside his first friend, where he painted this watercolor, in his birth and death place, the island of Saint Lucia, in the Antilles.

The sea is the muse of many a poet.  Ocean depth, motion and mystery compelled Walcott, and so many others, to put poetic pen to paper.  Here’s just one of Walcott’s many sea poems – check them out, and the documentary “Poetry is an Island” about his life.

There are so many islands!
As many islands as the stars at night
on that branched tree from which meteors are shaken
like falling fruit around the schooner Flight.

But things must fall, and so it always was,
on one hand Venus, on the other Mars;
fall, and are one, just as this earth is one
island in archipelagoes of stars.

My first friend was the sea. Now, is my last.
I stop talking now. I work, then I read,
cotching under a lantern hooked to the mast.
I try to forget what happiness was,

and when that don't work, I study the stars.
Sometimes is just me, and the soft-scissored foam
as the deck turn white and the moon open
a cloud like a door, and the light over me

is a road in white moonlight taking me home.
Shabine sang to you from the depths of the sea.

In his Nobel speech, “The Antilles: Fragments of Epic Memory,” he describes the “dialects of my archipelago;”

“Antillean art is this restoration of our shattered histories, our shards of vocabulary, our archipelago becoming a synonym for pieces broken off from the original continent….

“Poetry, which is perfection's sweat but which must seem as fresh as the raindrops on a statue's brow, combines the natural and the marmoreal; it conjugates both tenses simultaneously: the past and the present, if the past is the sculpture and the present the beads of dew or rain on the forehead of the past.

“There is the buried language and there is the individual vocabulary, and the process of poetry is one of excavation and of self-discovery. Tonally the individual voice is a dialect; it shapes its own accent, its own vocabulary and melody in defiance of an imperial concept of language, the language of Ozymandias, libraries and dictionaries, law courts and critics, and churches, universities, political dogma, the diction of institutions.

“Poetry is an island that breaks away from the main. The dialects of my archipelago seem as fresh to me as those raindrops on the statue's forehead, not the sweat made from the classic exertion of frowning marble, but the condensations of a refreshing element, rain and salt.”

Groups that come to Pacific Grove for our Blue Theology mission trips and pilgrimages read and write poetry at Point Lobos State Reserve, and like Walcott we often experience the sea as our first friend and home.   May 9 is a special Blue Theology Retreat and Resource Day for clergy and religious educators, with a sustainable seafood lunch.  Dive in!  Bluetheology.com
Posted by Deborah Streeter at 5:57 AM