“The Earth is groaning, and if she is in pain, all of us are in pain.  We need a new green theology of liberation.” 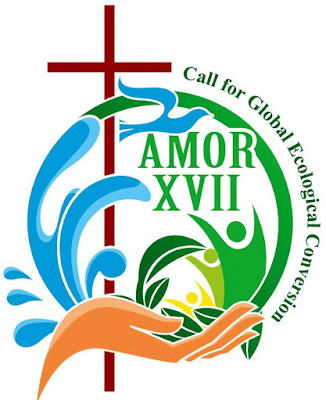 Preach it, Cardinal Bo! Charles Bo was recently appointed Myanmar’s first Cardinal by Pope Francis. Bo preached a dynamite sermon this week to hundreds of nuns at their regular AMOR conference (Asia Oceania Meeting of Religious Women.)  They’ve never invited men before, but organizers said this year’s theme, “A Call for a Global Ecological Conversion,” needs everyone on board.

They got their money’s worth in Cardinal Bo.  Quoting Francis’ encyclical on climate change, “Laudato Si: On Care for our Common Home,” and Eastern Orthodox Patriarch Bartholomew, who said that when humans cause climate change it is a sin, Bo challenged, “We need a major revolution — a revolution in thinking — a revolution in our theology.  We need to evolve an eco-theology.”
Talk about a revolution in theology: Bo said, “We are gathered here today not against ISIS terrorists.  We are gathered here against economic terrorists and ecological terrorists.  Rich countries bear the brunt of responsibility for global warming.  We are a poor nation.  Rich countries throw carbon into the atmosphere. We suffer and bury thousands after every natural disaster.  Rich nations should use their resources to help solve environmental problems. Science needs to really consider what the options are, because poor countries are really suffering because of global warming — I think that's a warning for the whole universe."

Myanmar is the second most vulnerable nation (after Honduras) for global warming, subject to cyclones, floods and other disasters spawned by climate change.  Just an increase of 4 degrees will inundate and destroy many islands of Oceania, and countries like Australia, the Philippines and Indonesia will see millions of environmental refugees, he said.

Bo outlined several concrete proposals that religious can undertake to help counter ecological degradation, including fighting for ecological justice, undertaking ecological evangelization, paying greater attention to indigenous religious traditions, and listening to Eastern religions and their concept of "interbeing" with nature that affirm the sacredness of ecology more than Judeo-Christian religions do.
Catholic religious life needs to be a counterculture to the greed and consumerism that are behind many environmental issues, and embrace a simplicity and an eco-spirituality exemplified in Eastern religions, Bo said. Buddhist monks are not allowed to own anything except a begging bowl and needle and thread. Catholic religious of the East "need to adopt a lifestyle that is more like Eastern religions: simplicity and veneration of nature."
I learned about Cardinal Bo and the fantastic AMOR women religious of Asia and Oceania from the “Eco-Catholic Blog” I get weekly from the National Catholic Reporter.  (I’m quoting extensively from the blog.)  This blog is full of hopeful examples of actions by local US churches and international Catholic activists for environmental justice.
Although I call my ministry Blue Theology (for the blue ocean,) I’ll sign up for Bo’s Green Liberation Theology as well. It’s all one planet, and as Cardinal Bo says, she is in pain, that’s how drastic and dangerous the ecological crisis is.
I believe he is quoting scripture here, Paul’s description in his Letter to the Romans that the coming of the Cosmic Christ changes things so much that it’s like all of creation is groaning, he says, like a woman in labor.  It is the suffering pain before a new birth.
Let’s heal and liberate the suffering earth, and be midwives of her new blue/green birth.
I write about Blue Theology, ocean spirituality and stewardship, every Wednesday.  We host youth mission trips and adult pilgrimages in Pacific Grove, Ca.  Four different groups are coming this spring, kids, college students, intergenerational groups.  We still have some openings this summer.  Bluetheology.com


https://www.ncronline.org/blogs/eco-catholic/myanmars-cardinal-bo-calls-green-theology-liberation
Posted by Deborah Streeter at 5:57 AM