Gathering of the Waters

Gathering of the Waters

One look at this photo tells you I’ve been doing Blue Theology for a long time – this was 2002! 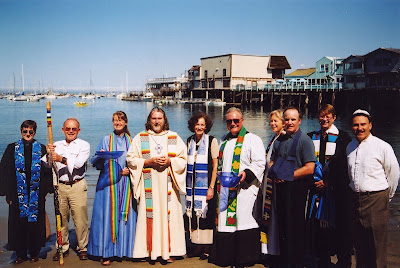 The occasion was a big Ocean Fair to celebrate the tenth anniversary of the federal designation of the Monterey Bay National Marine Sanctuary.  I was serving on the Citizens Advisory Council for the Sanctuary at the time and offered to gather interfaith religious leaders and lead a “Blessing of the Sanctuary” as part of the celebrations. I assured the federal NOAA staff that I was a firm believer in the separation of church and state, but if they wanted some kind of ritual alongside all the speeches I’d be glad to put it together.  Happily they welcomed the idea, and later featured this photo in the news reports – we do look good!

My dear friend, Catholic priest Scott, (center) brought a conch shell and burning sage in an abalone and some sweet acolytes.  John the Ohlone leader brought his sacred staff.    I brought my blue blessing bowl.  Everyone brought readings about water from their sacred texts.

Representatives from many of the 15 National Marine Sanctuaries were there, Atlantic, Pacific, Great Lakes.  I had asked them, and others I knew who were coming, to bring a small vial of water with them from their home tap, creek, river, lake, or ocean.  40 or so folks came up onto the stage, kids, federal employees, solemnly said where their water was from and poured it into the common bowl.  I held it up and said a prayer of thanksgiving blessing on the water.

Then we processed, clergy and acolytes and kids and workers, with the bowl held aloft, through Monterey’s historic park, past the old Customs House, down to this little beach by the wharf.  We heard many sacred readings about water, and then I poured the water from the bowl slowly back into the bay, the sanctuary, the holy place.

From many places far and wide, the drops came together as one, and then we returned the gift, all back to its source, mother ocean.

My friend Nashwan, right, brought water from the farthest away – Mecca, most sacred place of his Moslem faith.   This was just a year after 9/11, and Nashwan had visited many of our churches patiently explaining Islam and its wide landscape.  When I left the little beach after the service I looked back down and there were Nashwan and Ann, the president of the synagogue, deep in conversation.  Gathered together by the one water?

I’m being installed as Community Minister for Blue Theology in 10 days, July 10, 2pm, at La Selva UCC, south of Santa Cruz, having finally figured out how to have my denomination formally authorize me for this long time ministry.   All are invited.

We’ll begin the worship service with a Gathering of the Waters.  Same blue bowl.  To build the community.  And so we can remember again that all water is one, a cycle of blessing and bounty.  This ministry of 15 years will enter a new phase, a new stream, a new current, a new wave.

Posted by Deborah Streeter at 6:08 AM