The King Draws Near

The King Draws Near

We went down to these our favorite tidepools on the afternoon of the Winter Solstice, to check out the King Tides. 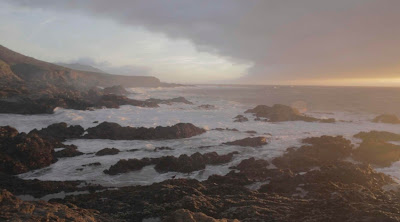 King Tides are the mightiest tides. The highest highs of the year.  And the lowest lows.   Every year near the Winter Solstice and Christmas and New Year, the high tides, called tidal surges, crash and flood.  Tidal scourings, the lows, happen at the same time, sucking water far far out, revealing rocks and tidepools and plants and animals not seen any other day.

Faithful readers of these Blue Theology postings recall (Nov. 5) that I am a low tide girl, I like the surprise revelations.  The photo that day was a lovely Monet, a wide Normandy beach.

This too is a low tide picture, but it’s the Central Coast, exposed rock AND crashing waves.  It was both revealing and scary.

That King Tides come this time of year seems appropriate.  As times are ending and beginning, shortening and lengthening, so too are the oceans rising and falling at annual extremes.  Why now?  Earth and Moon and Sun, those distant swirling rocks, this time of year draw the closest to each other.  In their annual dancing around the galaxy, the three now form a line as if square dancing, with paired dance steps called perigee (Moon closest to Earth) and perihelion (Earth closest to Sun).

Our family was doing a little perigee and perihelion dancing that day, drawing near together for the holidays. So we too danced down to the sea.  We climbed far out on newly dry rocks.  The Sun did seem just a bit nearer as it set into the sea.  We gave thanks for the King.  Tides.

(I first posted this last year, also on the solstice.  We’re together again this year, and did some more dancing down to the sea.  Happy Solstice and Merry Christmas!)

Posted by Deborah Streeter at 7:16 AM