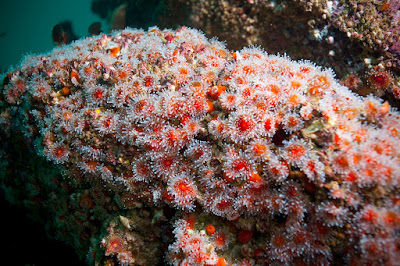 When I started volunteering at the Monterey Bay Aquarium in 1997, the Kelp Forest exhibit was located in “The Nearshore Wing.”  Recently they renamed that half of the Aquarium “The Ocean’s Edge.”

I like “nearshore” because it’s scientific.  Marine scientists divide the meeting of land and sea into various “zones.” Textbook cross sections label the many zones, from the high dry beach on down to the deepest dark ocean, as variously “nearshore,” “high intertidal,” “benthic” and many more.   I thought “splash zone” was just a cute name for the kids’ section – no, it’s a real zone where there’s wave splash on the rocks, but not constant water.  Every plant and animal adapts to life in its particular zone.

I also like “near” because it’s sort of comforting – something is nearby, nearly here.  Shall we meet at the nearer shore? It’s a soft word.

“Edge” is hard, scary, sharp.  The marketing department is probably trying to hype the visitors’ sense of adventure.  We’re on the edge!

I’ve got enough hard, scary, sharp edge places in my life.  So does our world.  I guess I’m not a thrill seeker.  I like to figure out who or what is near so I can make a connection and we can be nearer.  Nearer and dearer.

This creature wants to live in a near zone, not on the edge.

At the candlelit Taize service this month, over and over we sang, “Look to God, do not be afraid, lift up your voices, the Lord is near.”

As I set up my crèche scenes I tried to place everyone near each other; parents, baby, sheep, shepherds, magi – more body heat.  Nearness brings warmth.  It’s cold out there.

In my daily reflection I read from the book of James, “Draw near to God, and God will draw near to you.”

With my writing partner I tried an early version of this post.  I got going about whether “near” refers to time – it will arrive soon, or space – it’s located close by.  I wrote a paragraph arguing that the time-space continuum proves “near” exists in both time and space.  I went on for some time.  She said calmly, “Near means intimacy.”

Nearer, my God, to thee.

(Photo Chad King, NOAA.  These strawberry anemones look like Christmas decorations,
soft, and near. The photo is off Pacific Grove. You can also see them in the Nearshore Wing.)

Posted by Deborah Streeter at 6:44 AM