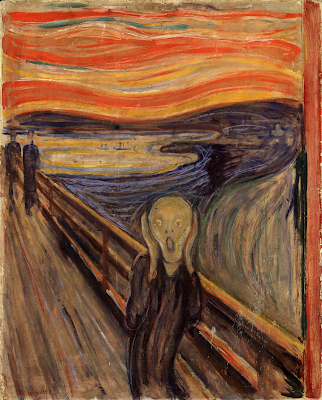 Fire is shrieking again in California.

Edvard Munch titled this painting in German “Der Schrei der Natur,” “The Scream of Nature.”  In Norwegian he called it “Skrik,” meaning “shriek,” a more pained and searing sound than what we usually call “The Scream.”

The horrific fires burning this week in California, including two in rural Monterey County, near Salinas and Cachagua, bring back sad and scary memories for me of the Soberanes wildfire that burned all summer in 2016 in my neighborhood and the Los Padres Forest, 140,000 acres, at that time the most expensive wildfire in US history.

Here’s a rewrite of my column from 2016, days after we had been finally allowed back into our mercifully saved house, after three weeks’ evacuation.  Many folks this month are not so lucky.

A therapist neighbor says we are a community of both relief and grief.  Some of us are home, cleaning up fire gel on the outside and smoke on the inside.  But others are sifting through the blackened debris of their houses and their lives.

And listen. For the roar of fire.

It’s not just Edvard Munch who hears the shrieks of nature.

The wise “Earth Bible” series offers six “Ecojustice Principles.”  One is the Principle of Voice: “Earth is a subject capable of raising its Voice in celebration and against injustice.”

Nature makes all kinds of noises.  Deep calls to deep.  All creation is groaning as in childbirth.

But the noise I’m hearing from these fires and seeing in this painting is a shriek of pain.   We humans treat nature as an object, not a subject.  We stab the landscape with the destructive forces of climate change, drought, overpopulation, a careless and cruel attitude of ownership and objectification.  (I’m talking about you, hikers who started the fire, but we’ve all set the dry stage for worldwide wildfires.)

This fire is a shriek of pain from the land.

Munch wrote about this painting, “One evening I was walking along a path, the city was on one side and the fjord below. I felt tired and ill. I stopped and looked out over the fjord—the sun was setting, and the clouds turning blood red. I sensed a scream passing through nature; it seemed to me that I heard the scream. I painted this picture, painted the clouds as actual blood. The color shrieked. I stood there trembling with anxiety – and I sensed an infinite scream passing through nature.”

Nature is loud and has something to say.  Sometimes the trees of the field clap their hands in joy.  But today to me she sounds sad and mad.

I usually write in these weekly posts about the ocean.  Which can also be noisy and destructive, especially when amplified by climate “change.”   Scientists now call it “climate chaos,” instead of “warming” or even “change.”  No denying the chaos of raging hurricanes and ravaging fires.  Nature’s voice is loud these days, and she’s screaming at us, a cry of pain, a shriek.

Posted by Deborah Streeter at 11:24 AM