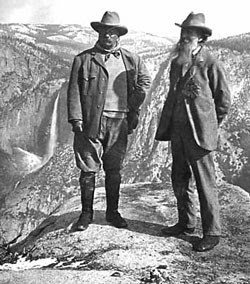 I've spent a few blessed days here in Yosemite.  Every day I thank John Muir for inviting President Teddy Roosevelt here in 1903 on a three day camping trip.  The sign marking their campsite near Bridal Veil Falls say, "Here they camped and talked forest good."  Roosevelt was changed by that experience, and he went on to protect Yosemite and many more national parks and wilderness areas.

I remember in 1998 when another President, and Vice President, Bill Clinton and Al Gore, also spent significant time outdoors, when they came to Monterey for a big ocean conference.  There they learned from our John Muir-esque locals about the need for ocean protection, and Clinton and Gore, like Roosevelt, went on to extend more federal protection to wide open spaces, in this case the wet ones.

I was heartened last week to see so many scientists elected to Congress, including Joe Cunningham, an ocean scientist from South Carolina, and the new Nevada senator, Jacky Rosen, a software engineer who proudly affirmed in her campaign how her solar energy company had cut her synagogue's energy bill by 70%.

We at the Blue Theology Mission Station strongly believe that science and religion deeply inform each other and are not mutually exclusive.  We encourage our visiting groups of youth and adults to get involved in conservation efforts locally and nationally.   Thanks be to God to John, Teddy, Bill, Al, Joe, Jacky and all other science-based nature protectors.
_______


Posted by Deborah Streeter at 6:32 AM