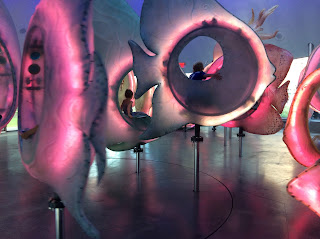 I took a ride on this magical new Sea Glass Carousel last week, in New York City’s Battery Park.  Waiting in line with lots of excited children, I had happy memories of childhood merry-go-rounds in Oak Bluffs and Palisades Park.

But this time, instead of horses, I rode these exotic fish.  For four full minutes, 30 angelfish and lionfish shimmer and rotate, change color, yaw and twirl, up and down, to the strains of mysterious music.

If our Blue Theology Mission Station had a theme park – this would be the main attraction. 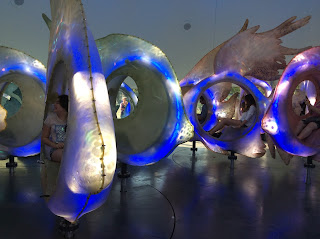 One of the carousel’s creators was set designer on the Broadway version of “The Little Mermaid.”  Darling it’s better, down where it’s wetter, under the sea!

It’s called Battery Park because the first Dutch settlers set up cannons there. A hulking War of 1812 fort still looms over the shoreline.  The nearby new Freedom Tower can’t erase the nightmare of 9/11.  2012’s Superstorm Sandy flooded and scoured the park.  Despite happy families and tourists, the raw memories of war, terror and devastation still stalk the park.

Like beating swords into ploughshares, spears into pruning hooks, the Battery Conservancy has turned cannons into fish hooks.  And fish carousels. Sea stars whose arms have been devoured can grow back new arms; so the Carousel is helping the park resurge and resurrect.

(I wrote last week about “Big Blue Live,” the BBC/PBS live TV/online show about ocean diversity and recovery on Monterey Bay.  My favorite line so far, “This is about redemption!”  You can see the last episode tonight Sept. 2.  Or stream the whole thing anytime from pbs.org – it’s fantastic.)
Posted by Deborah Streeter at 5:44 AM