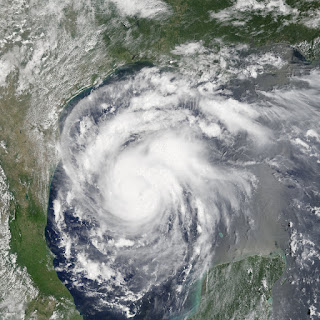 Are animals deep in the sea also suffering while Hurricane Harvey rages above the surface?

Surely sea creatures are better adapted than is downtown Houston to crashing wind and wave, endless rain.  But is it really better down where it's wetter?

-Some marine animals, like sharks and dolphins, can sense the coming change in barometric pressure, and have been observed escaping danger by swimming deeper.

-Many fish and invertebrates are tossed like so much flotsam and jetsam on shore to die.

-All that extra fresh rainwater, lighter than salt water, sits on the surface and prevents oxygen from getting down to deep sea critters - anaerobic suffocating to death. 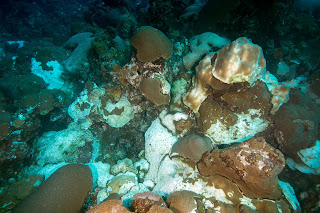 -But the worst hurricane effect, if seems, is to coral and other filter feeders.  (Yes, coral is an animal.) In one study coral cover was reduced by about 17% in the year following a hurricane.  “Wave action increases turbidity and sedimentation, which lowers light penetration to the photosynthetic algae in the coral's tissues, and also directly kills the coral through smothering, as the substrate particles clog cilia on their tentacles. The heavy rainfall associated with hurricanes alters the salinity of the water, which is an additional stress for the fragile marine life.”

Watching the awful images of Harvey’s devastation and death to land animals, including humans, and that vicious storm swirling above not just land but Gulf water, I began with a question, and did some research.

But I end with a lament, in the style of the Psalmist, “How long, O Lord?”

How long will we inflict pain and suffering on the water and creatures in the Gulf of Mexico?

For years we have sent agricultural fertilizer down the Mississippi and created a dead zone in the Gulf the size of Massachusetts.  And now this?

We have built oil towers throughout the Gulf, like the Deepwater Horizon and so many others, that have become towering infernos of toxicity and death.  And now this?

We have driven and flown and put so much CO2 in the Gulf that its temperatures have risen 4 degrees in just a few years, so that hurricanes hit the shore at greater and greater speed and their clouds are more and more saturated.  And now this?

All that carbon is making the Gulf much more acidic and the coral is weakened and starved and bleached in these repeated “mortality events from multiple stressors.”  And now this?

Now this happens?  The turbulence and sediment from these hurricanes made worse by our actions are also suffocating and starving the coral?

As on land, some undersea regions are miraculously spared hurricane damage and others even more miraculously resurrect in new seasons.  But coral grows very slowly.  The Gulf is getting only warmer, more acidic and deader.  Storms are coming faster and more often.

On our Blue Theology service trips and pilgrimage retreats we see beauty, and we pray “Thank You God” and “Wow!” And even in Monterey Bay we see the effects of climate change, and we pray “We are Sorry” “Help” “How Long?”  Come pray and learn and serve with us, bluetheology.com.  I post these “Tide-ings” every Wednesday.

(Photo of a “coral mortality event” from several years ago at the Gulf of Mexico’s Flower Gardens National Marine Sanctuary, which Harvey pummeled this week.)

Posted by Deborah Streeter at 7:08 AM