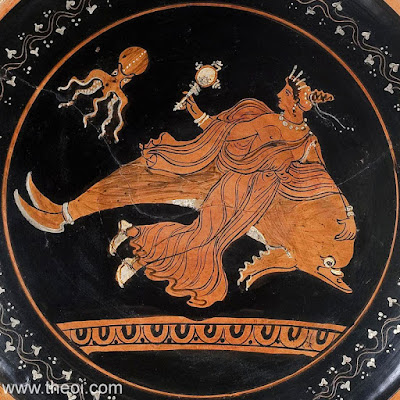 I want to be a Nereid!  In Greek mythology these immortal ocean nymphs embody all the bounty and blessing and beauty of the sea.  The Greeks have many ocean deities, being a seafaring people.  Olympian ocean god Poseidon, best known, is strong and powerful, like the sea, but can be angry and destructive (also like the sea).

I am more partial to the 50 Nereid sisters, who swim with the dolphins, singing, splashing and rescuing lost sailors.  Rarely the stars of a myth, they are more the chorus, appropriately, since they are said to have lovely voices.  Even more appealing is their consistent benevolence; they help sailors in storms and point the lost toward shore. They embody the sea at its least angry and destructive.

Unlike so many women of ancient myth whom patriarchy sidelines and renders nameless, the Nereids are called by name:  Headland’s Hope, Calm, Bounty, Power, Glitter, Healer, Glory, Swell’s Embrace, Race with the Waves, Sparkler, Fair Isle, First Light, Eyes of the World, Blossoming Spray and more.

Why in so many cultures is the sea referred to as “she” and embodied as a goddess?  Perhaps these prescientific ancients knew full well that the sea really is mother of us all, evolved as we are from those waters.  Experiencing the sea as a divine marine mother may also reflect the experience we all have in our mother’s womb, where the amniotic fluid sloshes like the sea (listen to an ultrasound) and is the same salinity as our original birthplace.  You don’t need to read Carl Jung or Joseph Campbell to know that myth is born from our deep collective unconscious, and the ocean is the deepest of it all.

Homer, Hesiod, Herodotus and Plato all celebrate and name the Nereids.  Artists render them widely on temple, sarcophagus and vase (this one is 4th century BC, South Italy.) Disney tried to evoke their spirit in “The Little Mermaid.”  The movie honored well the Nereid gift of songs from the sea with some fantastic music, but Ariel and her sisters spend way more time pleasing Daddy and the prince than do the free female spirits of the Aegean.


On our Blue Theology service trips and pilgrimages in Pacific Grove we sing ocean songs and listen for the voice of the sea.  Occasionally we spy a Nereid.  Bluetheology.com.  I post these “Tide-ings” here and on Facebook
every Wednesday.
Posted by Deborah Streeter at 6:15 AM