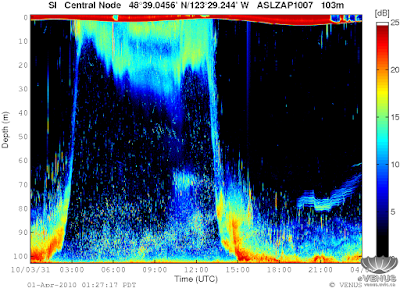 But the eclipse's disruption of animal routines extended far beyond land.  As the sky darkened, many many deep sea critters said to themselves, "Seems early for nighttime, but up we go," and set out on their nightly migration to the surface.

Millions upon millions of sea creatures - plankton, shrimp, jellyfish - hide in the dark depths all day, and then in the safety of the dark they drift and swim up to the surface.  Many of these animals can bioluminesce, create their own light, to find food or a mate or scare a predator.  So during the nighttime commute they also turn on their headlights.

It’s the largest animal migration on our planet and it happens every night.  And if these microscopic animals were our size, these tiny drifters would be commuting on foot 20 miles a day.  Each way.

So thick and dense is this daytime layer of plankton in the depths that early sonar scientists mistook it for the sea floor.  Until they noticed it rising and falling at night.  Wily submarine pilots even figured out how to hide beneath this thick “false bottom.”  But when marine scientists skimmed the ocean surface at night and found such dense and bioluminescent plankton, they hypothesized that sea creatures work a graveyard shift.

But how to prove this?  Woods Hole MA ocean researchers turned their attention skyward, up, not down, and chose the day of an eclipse in October 1963, to sail into the Atlantic and see what effect a daytime total eclipse would have on these nighttime commuters.

An account reads, “The marine researchers watched as the moon moved into its place in front of the sun.  Daylight rapidly faded, and the migration mystery was solved: the deep layer of animals began to rise. Bioluminescent creatures started to shine, and nocturnal creatures started a frantic upward thrust. As the world grew darker, they swam upward nearly 80 meters. But this frantic migration didn’t last long. As the moon receded and the sun revealed itself, the massive animal layer did an about-face, scrambling back into the safety of the darkness. One can only imagine the frenzy as millions upon millions of creatures clambered towards the surface and then, just as quickly, rushed back to the deep.”

Nowadays scientists can use a more sophisticated tool, the ZAP (Zooplankton Acoustic Profiler – that’s what this image shows) to measure the sound waves as these animals move up at night.  Or during an eclipse.

Is there a Blue Theology gospel in this ocean migration?  All is motion, including light and dark.  A thousand ages in God’s sight, a thousand feet, miles, lightyears - they seem tiny in the sea, we seem tiny in the universe, but an evening gone.  There was evening and morning, all good, all a blessing.  Praise God sun and moon, praise God all you shining stars.  Laudato Si.  Brother Sun, Sister Moon.  Out of the depths I cry to thee.  Blessed are the commuters, and all sojourners and pilgrims.

I found myself humming Brian Wren’s fabulous hymn Joyful is the Dark: “Joyful is the dark, holy hidden God, rolling cloud of night beyond all naming: Majesty in darkness, Energy of love, Word-in-Flesh, the mystery proclaiming.”
______
Migrate on down to our Blue Theology Mission Station in Pacific Grove for a personal retreat or group service trip in ocean stewardship and spirituality.  Bluetheology.com
Posted by Deborah Streeter at 6:31 AM