To Fish for Depth and Mystery

To Fish for Depth and Mystery 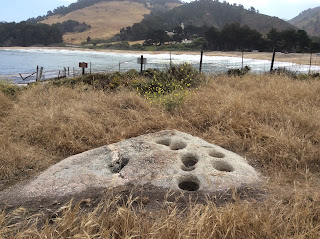 For centuries, native Ohlone women ground acorns in these deep granite holes.  I took a friend to see this rock today - it’s now at the edge of Point Lobos State Reserve, overlooking Carmel Bay, with the Carmelite Monastery in the distance - and we could almost hear those long ago women and their children chatting and singing as they prepared this essential food.  (California grinding stones are often in places safe for children to play around, since it was women’s work, and with a good view, since it is long tedious work.)

What is now Point Lobos State Reserve was a rich source of food and community for the Ohlone, and many are the food prep areas, like this one.   Many also are the separate sheltered cooking areas, safe for fires.  Those we call middens, now marked by ashy soil and broken shells (yummy abalone served alongside the acorn mush.)  Point Lobos was a safe place, and bountiful.

The barbed wire fence was erected later, in the 1930’s, to mark the park boundary.  Around the same time a family paid to have the Carmelite Monastery across the bay built for cloistered nuns.  They still pray and sing the daily hours. 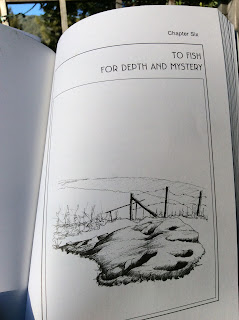 When Sally Smith did the pen and ink drawings for my book collection of many poets  inspired by Point Lobos, we chose this drawing for the chapter of “spiritual” poems, the ones not about cypress or otters, but those evoking mystery and death.  The history of Point Lobos is not just one of bounty and safety.  The barbed wire reminded me of another shameful part of Point Lobos history, the forced interment of longtime park resident families, like the Kodanis and Obatas and many other local Japanese American citizens, during WWII.

Ohlone women still come to Point Lobos, and when they see this rock, that wire fence, and the monastery beyond, they probably recall their own people’s forcible removal, and the miserable legacy of Junipero Serra’s missions, another American genocide.  (Already we have local protests of Serra’s upcoming canonization.)

We titled the book “Dancing on the Brink of the World” which is a line from an old Ohlone song, one probably sung by those grinding women and children.  They lived, literally on the brink, on the edge of the continent, atop high sea cliffs.  And they also stood on the brink of eradication, death by fences and friars.

It’s all the same granite: Point Lobos cliffs, this grinding stone and the walls of the church.  It’s hard, and lasts.

Posted by Deborah Streeter at 8:27 AM