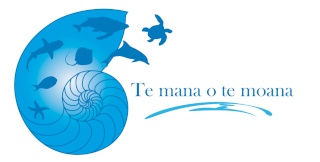 I can’t speak Tahitian, but when I saw this image, I could almost guess that “Te Mano O Te Moana” means “The Spirit of the Ocean.”  It’s the cool logo of an ocean stewardship organization in French Polynesia, a nation of 118 islands across a 1200 mile ocean expanse.  These folks surely know the spirit of the ocean!

Since we celebrated World Oceans Day this week (June 8), I will dip my toe, in this week’s Blue Theology posting, into distant waters, beyond my usual California Central Coast perspective.  (The UN established this holiday at the Rio Summit in 1992, honoring “oceans,” but many geographers say that there really is only one world ocean, all connected. I like the concept “one world ocean.”  With one spirit.) 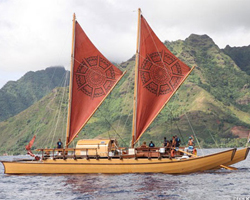 “Te Mano O Te Moana” is also the name of a new film released this spring about an epic odyssey that 100 Pacific Islanders embarked on several years ago.  A group called Pacific Voyagers build seven traditional-style ocean canoes, called vakas, but with added solar power, not gas, for instruments and communication, as part of their commitment to fossil fuel-free ocean voyaging.  Sailors from many Pacific Island nations took part, journeying from New Zealand, where the ships were built, to Hawaii, from California to Cocos Islands off Costa Rica, and from the Galapagos to the Solomon Islands, stopping also in Tahiti, Samoa and San Diego.  They said they sailed “in order to reconnect with traditional navigational skills, relying on the stars, wind and wildlife as our guides, to connect with different Pacific communities and with the ocean, and to spread the message of ocean protection.”

“We mapped our way in the wake of our ancestors.”

I like that - “wake” of our ancestors.  We all sail in the wet wake of our ancestors, and we owe them, as well our descendants, oceans with healthy spirits.  Or one spirit, one ocean.

You can see a great trailer of the film at <https://www.youtube.com/watch?v=1QwqNhGrQ-A>
Posted by Deborah Streeter at 10:21 AM