I Too Am Part of That Ocean

I Too Am Part of That Ocean 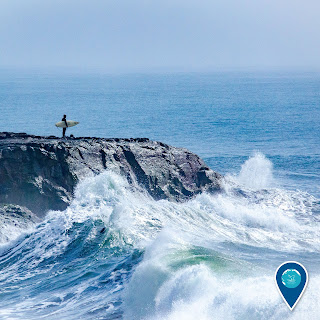 “With angry moans the fierce old mother incessantly moaning,
On the sands of Paumanok’s shore gray and rustling,
My own songs awaked from that hour,
And with them the key, the word up from the waves,
The word of the sweetest song and all songs,
That strong and delicious word which, creeping to my feet,
(Or like some old crone rocking the cradle, swathed in sweet garments,          bending aside,)
The sea whisper’d me.”

I think of Walt Whitman as a poet of urban life, but rereading him this week I found powerful ocean images. In this selection from “Out or the cradle endlessly rocking” he calls his birthplace Long Island by its Native American name, Paumanok." Off its “fish-shaped” shore the sea moans and whispers, awakening his poet voice and song, “the word up from the waves.”

In another poem, “Out of the rolling ocean the crowd,” a city crowd feels to Whitman like a rolling ocean, with innumerable drops/people.  As he brushes up against them he feels both the crowd’s cohesion and his separation from it, its “great rondure” and “us diverse.”

“Out of the rolling ocean the crowd came a drop gently to me,
Whispering, ‘I love you, before long I die,
I have travell’d a long way merely to look on you to touch you,
For I could not die till I once look’d on you,
For I fear’d I might afterward lose you.’

“Now we have met, we have look’d, we are safe,
Return in peace to the ocean my love,
I too am part of that ocean, my love, we are not so much separated,
Behold the great rondure, the cohesion of all, how perfect!
But as for me, for you, the irresistible sea is to separate us,
As for an hour carrying us diverse, yet cannot carry us diverse forever;
Be not impatient – a little space – know you I salute the air, the ocean and the        land,
Every day at sundown for your dear sake, my love.”

I share that feeling, the paradox of separation and cohesion, drop and ocean.  But as Whitman says, be not impatient, we are not separate forever.

Like him, I salute the air, the ocean and the land, every day at sundown, for your dear sake, my love.


This photo by Douglas Croft of a surfer at Lighthouse Point in Santa Cruz won this year’s “Get Into Your National Marine Sanctuary” photo contest.  Somehow it reminds me of Whitman’s moaning, fierce old mother sea and the paradox of separation and cohesion.  Come on our Blue Theology service trips and pilgrimages on Monterey Bay to hear ocean moans and whispers.  Bluetheology.com.  I post these Blue Theology Tide-ings each Wednesday, here and at www.bluetheologytideings.blogspot.com.
Posted by Deborah Streeter at 6:17 AM