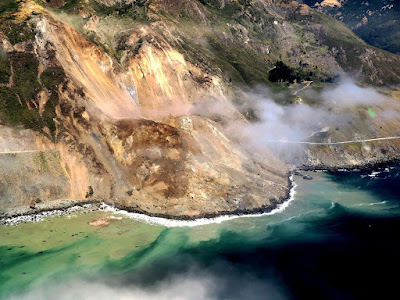 “If you look around the world, almost everywhere we are losing coast,” said UC Santa Cruz marine geologist Gary Griggs.  “There are only three places where we gain it.  Hawaii, where new lava flows into the ocean and we sell it for beachfront property; deltas, like the Mississippi, and then massive coastal landslides.

“But this new California land mass won’t be permanent.  It’s probably relatively short lived. It might take a couple years or a decade, but it’ll erode.”

The well-named “Mud Creek” Slide south of Big Sur moved 13 acres/10 football fields/2 million cubic meters of earth on May 20th from mountain to the sea.

Thanks to you all who got in touch with us after seeing this photo on national news.  No, it has not blocked us.  The slide is far to the south of the Big Sur community, but it does block all access from Southern California and will for at least a year.  We are 40 miles north of the slide, and we are also north of the failed Pfeifer Creek Bridge that has isolated another part of Big Sur from the north.

We have, of course, had our own slides and washouts here in our canyon this winter.  As Griggs says, water gives and water takes away.  Climate change is surely speeding up some of this slip sliding away, but the earth has actually always been dynamic, moving and shifting, churning and shaking.

I used our crazy geology as both backdrop and metaphor in a sermon called “Central Coast Christians: On the Edge and On the Move.” We who live west of the San Andreas Fault are literally on a different tectonic plate than the rest of the state, moving steadily north at about the same rate as our fingernails grow.  We are several inches north of where we were a year ago.  I praised our Central Coast UCC churches in the sermon, saying that this life of motion on continent’s end makes us more edgy (in a good sense!) and willing to change.

We long for a solid foundation, how firm a foundation, an appealing image for God. Granite falling into the sea troubles me, and humbles me.  But all of life is motion, even the inanimate, from atom to ocean current.  The increased instability around me (geologic, political) is literally unsettling. But motion is the essence of creation.  Perhaps it’s just more obvious these days.  It seems like our new normal is instability.


Our Blue Theology Mission Station in Pacific Grove is on sturdy rock, for now.  Check out bluetheology.com for our youth mission trips and adult pilgrimages by the sea.
Posted by Deborah Streeter at 5:47 AM