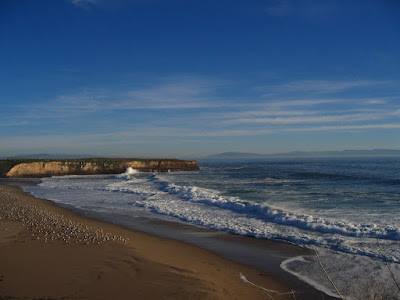 “I agree with you,” said one prominent but dispirited author to another in 1927, “Religion is an illusion.

“But I do experience ‘religious feelings,’ as do millions of others, and I wish you would study those.  By this I mean, not religious institutions, but that deep sense of the eternal, a feeling as of something limitless, an indissoluble bond to all that is.

“I would call that feeling ‘oceanic.’”

Actually, he wrote “oceanique,” because this was French 1915 Nobel Literature prizewinner Romain Rolland, writing Sigmund Freud about the “oceanique” feeling of awe, that he called religious.

Another Blue Theologian! Rolland knew that the ocean is “awe-some” and that awe is “oceanique,” a feeling of connection, no limits, the eternal. We at the Blue Theology Mission Station will add Rolland to our pantheon of ocean saints, along with Francis of Assisi, Rachel Carson, Jacques Cousteau and Sylvia Earle, spiritual lovers of the sea, lovers of the spirit of the sea.

In Freud’s response he, of course, dismisses not only religion, but this feeling of awe, telling Rolland it was but a vestige of childhood undifferentiated ego, which people should just grow out of.   But Rolland, like William James, appreciated that religion is not just institutions and doctrine, but about experiences and feelings, like awe.

(I call these men dispirited because they say religion is an illusion, but Rolland was actually a pacifist who refused to fight in WWI and whose books on Gandhi helped spread the Indian leader’s reputation.  I first learned about him in Vezelay, the French “thin place” where I go on retreat.  He loved that village also, and you can visit his home there, and his grave.)

Freud may have dismissed the psychological value of awe, but nearly a century later (this month) naturalist author Terry Tempest Williams (now there’s a highly spirited woman, and another BT saint!) writes in the Atlantic in praise of awe, quoting psych studies:

“As vastness expands our worldview, it shrinks our ego. Awe makes spiritual and religious people feel a greater sense of oneness with others. And this oneness can make us nicer: Researchers found that inducing awe—say, by having people stand in a grove of tall trees—increased generosity, in part by stoking ‘feelings of a small self.’

“Awe also shapes our sense of time. One series of studies found that awe made time feel more plentiful, which increased life satisfaction, willingness to donate time to charity, and preferences for experiences over material products.”

If you spend time by the ocean, and if you are “oceanique,” you will be nicer, more satisfied, and generous.  Our Blue Theology Mission Station can help that happen.  Be in touch. Get wet, and connect with the eternal.

I write these Blue Theology “Tide-ings” every Wednesday.  Please share.  We are booking retreats and mission trips for this spring and summer.  We are also planning a Blue Theology Day in Pacific Grove for clergy/religious educators on May 9, 2017.   Bluetheology.com