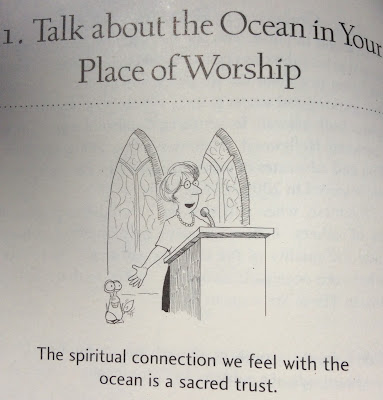 Look – it’s Hawthorne, the hermit crab in the comic strip “Sherman’s Lagoon.”  He’s in church, assisting the preacher, perhaps bringing holy greetings from the Lagoon.  Jim Toomey’s droll strip about Sherman the doltish shark (Toomey says he’s Homer Simpson with fins) and his underwater friends appears in 150 US newspapers and in 30 foreign countries.

Don’t you love it when two of your favorite things come together unexpectedly?  I’ve always liked this comic strip, and then I found out that Jim Toomey is a hugely committed ocean advocate.  This image comes from the book he illustrated, “50 Ways to Save the Ocean” by David Helvard.  It’s a great book that I buy in bulk and hand out liberally.

This image is #11: “Talk about the ocean in your place of worship. The spiritual connection we feel with the ocean is a sacred trust.” I love that Helvard includes worship as a good way to save the ocean, and that Toomey illustrates with a woman preacher! In fact, several of the “ways” are spiritual, like “Get Married on a Wild Beach.”  Each one has a good rationale and helpful tips – “Pack everything out, littering is not romantic.  Check the tide tables…”

Some other good suggestions:
#3: Dive Responsibly -Take only pictures and leave only bubbles while exploring underwater wonders.

#45: Talk with Your Cousin in Kansas about the Weather - Become an educator on how the oceans affect us all.

#49: Vote for Those Who Protect the Coast – Let your elected representatives know you evaluate them and vote on how they treat the coast and ocean.  (Cute picture of Hawthorne the hermit crab coming out of the voting booth.)

#20: Opt Out of the Throwaway Culture - What we throw out doesn’t ever really go away.

On YouTube you can see Toomey’s great TED Talk and his sweet 100-second tribute to Jacques Cousteau on his 100th birthday.  He donates all kinds of artwork for the National Marine Sanctuary Program.  He’s on the board of Mission Blue, Sylvia Earle’s advocacy group for Marine Protected Areas.  And he’s just a funny cool guy.

Thanks, Jim, and thanks Hawthorne for being like me, a preacher for the oceans.
Posted by Deborah Streeter at 5:53 AM