Should I join this line of pilgrims to the Holy Isle, Lindisfarne, off the east coast of England, next summer? 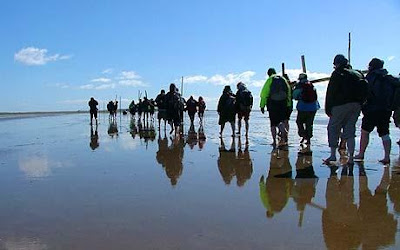 This wet route, the Pilgrim’s Way, is marked by posts in the sand, since the path to the small remote island floods twice a day at high tide. This picture shows an Easter morning pilgrimage.

It’s been called “The Holy Isle” ever since St. Cuthbert was bishop and hermit there in the 7th century.  It’s a “thin place” with sacred ruins and an active spiritual community.  40 years ago, on my first pilgrimage to holy sites, I went to the holy island of Iona off Scotland’s west coast, whence came the monks who founded Lindisfarne.  Now I try to go to France and the UK every other year, on a “soul journey.”

This week I began the winter reading and prep time for my pilgrimage, almost as fun and devotional as the journey itself.  Today I read this description by a modern pilgrim who walked to Lindisfarne across the tidal waters, on the Pilgrim’s Way;

“Battling along the north coast with the wind blowing in gusts of 90 miles an hour, I came at last to Lindisfarne.  I arrived in time before the tide closed the causeway.

“I was in a sacred temple of which the sea is the keeper.

“Twice every day the sea opens the gates of the temple to let the pilgrim, the visitors and even the tourists in.  Tourists generally return before the sea closes the gates, but pilgrims are in no hurry.  They stay the night, or a few nights, to be soaked in the tranquility and purity of the place.

“The monks who chose to build the priory here were very wise; there are very few such sacred sites where the sea is the guardian of the soul.

“The moment I stepped on the white sand I was free of the busy world.  Here I was in the company of the sun, the sky, the sea, the sand dunes, and the spirits of saintly souls.

“St. Cuthbert prayed and meditated in solitude, totally surrendering himself to the sacred sound of the sea.

“Every night after midnight when all his fellow monks were asleep he would get up and go out.  On one occasion, a curious monk, a light sleeper, noticed this and followed him.

He found him in the sea up to his armpits, where he spent the night occasionally singing hymns, and with only the waves for accompaniment.  At daybreak Cuthbert came out of the sea and knelt on the sand to pray.  Two otters followed in his footsteps, licked his feed and warmed them with their bodies.

“This is the island where humans, nature, and religion are one.”  (Satish Kumar, in ‘Traveling Souls: Contemporary Pilgrimage Stories.’)

The Psalmist writes: “Your way is in the sea and your path in the great waters and your footsteps are not known.” (Psalm 77:19)

I think my path may be though the great waters, to a sacred temple of which the sea is the keeper.  There I could surrender myself to the sacred sound of the sea.

(I’m planning some guided pilgrimage walks around the Monterey Bay area, as part of our Blue Theology ministry.  Be in touch….)
Posted by Deborah Streeter at 6:43 AM