There is No Legend of This Place

There is No Legend of This Place

There is no legend of this place
no myth of Gods or men
that being told could be translated
into our tongue,
or being translated could be understood
of our mind.

This is a lost place – out of the memory of the race –
of any known race.
One goes into it unaware;
one comes out from it haunted
as the trees are haunted
and the undying rocks
and the dark groves where fear is.

These that are here have no likeness;
they are not troubled as we are troubled;
they move on different feet – they look with other eyes
on a sea that hold their ships –
ships that come and go,
mysterious as thought –
shadows in a moon. 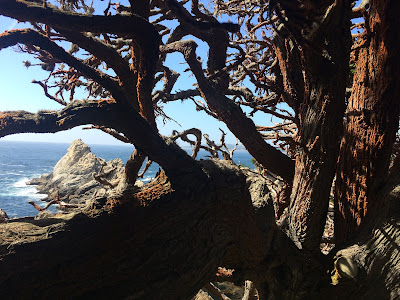 (English author and painter Jeanne D’Orge (1877-1964) came to NYC and was one of “The Others” with William Carlos Williams, Marianne Moore and Wallace Stevens; they did a poetry read at the Armory Show in 1913.  She moved to Carmel with her academic husband and children in 1920 but soon married the much younger fellow artist/eccentric Carl Cherry.  Friends with Robinson Jeffers and Edward Weston, she walked Point Lobos nearly every day. She donated their studio/home to be an arts center and it’s now the Carl Cherry Center, a great local place for art shows, theater, poetry readings.  It’s where the Monterey Bay Zen Center meets and I go there every week for meditation.   In my “Selected Poems of Point Lobos” I have four Jeanne D’Orge poems. A local account reads, D’Orge  “often appeared on the streets of Carmel wearing a big pink hat, ankle length Chinese robes and paint-stained tennis shoes.”  My kind of woman.)
Posted by Deborah Streeter at 7:22 AM