Written on the Chalkboards of History


Written on the Chalkboards of History 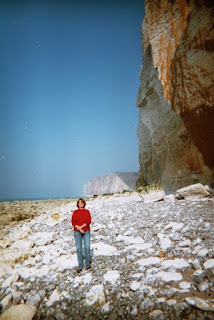 The signs read, “Attention! Failaises dangereuses!”  Dangerous cliffs.  Don’t get too close to the edge, read the signs at the top.  Here at the bottom, they meant, stay back from the cliff base, where giant rocks regularly crash down.

You can see that we ignored the signs and scrambled all day, both at the top and the base of these massive chalky French monoliths (right across the Channel from their sister White Cliffs of Dover).  Norah and I had long loved Monet’s paintings of this coast and vowed to go ourselves.  That night we stayed in the small fishing village, St. Valery-en-Caux, St. Valery-in-the-Chalk.

I’m indulging in a little travel nostalgia here, our trip almost ten years ago to Normandy’s “Alabaster Coast.”  Alabaster meaning white, like the chalk of school or sidewalk or sideline.

Chalk, which is, like so many things in our lives, a gift from the sea.

Thomas Huxley was the first to slice chalk very thin and place it under his simple microscope.  Seeing these complex round globules he said they looked like “badly grown raspberries” and christened them “coccoliths,” literally “berries of stone.”  In a fascinating lecture “On a Piece of Chalk,” (1868) he told the citizens or Norwich that “a great chapter of the history of the world is written in chalk.”  Like all English, they adored their precious white cliffs, source of their mythological name Albion (white).  But Huxley used the story of chalk to promote the then new science of geology, that the world was much, much older than the Biblical calculus of 4000 years. 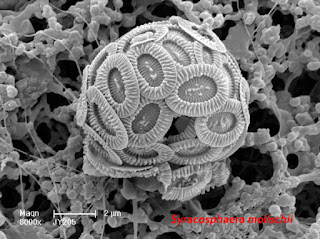 He proved that these coccoliths were actually the skeletons of ancient marine organisms, tiny plankton. Using this picture, and evidence from the deep sea muck being pulled up that year by the engineers who were laying the first transatlantic telegraph cable, he proved that England’s precious white cliffs, were “the dried mud of an ancient deep sea.”

We now know for certain what Huxley asserted, that when these tiny sea creatures died, millions of years ago, they sank to the bottom, where massive deep sea pressure and weight compressed them into chalk.  Then came millennia of geological shaking and uplift, and voila, (Sacre Bleu!) chalk cliffs.

“Attention!  Failaises dangeureuses!”  It was dangerous for Huxley to challenge the theological establishment and assert that the world was so old, and still constantly changing.   But he too was a rash explorer who ignored signs that said be careful.

He had tasted the pursuit of truth, as sweet as a “badly grown raspberry.” All thanks to a little marine organism.  Written on the pages of time.

(Check out <bluetheology.com> for more on our church’s adult retreats and youth mission trips on ocean stewardship and spirituality.  I also post these weekly meditations on Facebook.  Join the Blue Theology Mission Station page/group.)
Posted by Deborah Streeter at 6:49 AM